Me, Daughter and The Marsupials

It's L's birthday today, so I treat her to a 6am run around the pond. It's what any girl would want for her birthday. Although before we go, she does suggest that she ought to drape herself over me and try to talk me out of it but I am merciless.

It's a bit of a come down going by car to work but I feel I ought to get back as early as possible to give Doggo a good time before his dumping tonight. It's even more of a come down when I arrive at work. A work colleague has cycled the 10 miles into work on his MTB and then done a 5km run around Pride Park. Sounds like he’s duathlon training to me, I best watch my back. I'm feeling well outdone. Then there's L who's slotted in a triathlon of run-bike-gym this morning. She opted not to go to the pool for another round of applause.

I drive home and L is out with Daughter on her monumental paper round, so I take Doggo on the park.

Later, we all, yes all the family, all four of us but not Doggo head to Cast to celebrate L's birthday. L told Son a few weeks ago that he was taking her out to the cinema on her birthday, at the time he begrudgingly agreed, I recall that there was a lot of tutting involved but now he seems quite jovial about it all. I have a 'pass out' to go to the Wombats with Daughter.

It's a warm evening and pleasant enough to sit outside. We avail ourselves of the 'smalls', that's snacks by the way, and in my case a pint of Bass, which isn't terribly exciting.

It doesn't look as if L is going to win our bet. She reckons she can talk Son into helping out at the College's Open Day, for which he'd have to wear one of their bright red 'helpers' t-shirt. I tell her she has no chance and have offered her a free meal out at a posh restaurant of her choosing if she could persuade him. From Son's reaction tonight, I reckon my money's safe but I'd love to be proved wrong.

At 8:15 we go our separate ways. Daughter and I arrive nice and early at Rock City to catch the support band but find the stage already having lots of Wombats signs draped around it and furry creatures arranged on top of the amps. Not all of which look like Wombats, in fact one looks like the Loch Ness Monster. Anyhow, disappointingly it appears we've missed seeing Nottingham's own synth-pop duo 'I was a cub scout' (or is that 'Iwasacubscout', I'm never sure).

The earliest I can recall a main band hitting the stage at Rock City is 9pm; tonight at round 8.50pm the background music is suddenly turned up. One minute we're grooving gently to MGMT the next its 'Karma Chameleon' for which the assembled masses go mental. This appears to be the final warm-up act.

The barbershop style acapella of 'Tales Of Girls, Boys And Marsupials' heralds the arrival of the band and leads us into (the needlessly re-released) 'Kill the Director'. It sounds good, fast, and vibrant as the band hurl themselves into it and the crowd respond with equal amounts of hurling. It’s the first of many songs about 'a gender I'll never understand', so says singer and lyricist Matthew Murphy. Their album 'A Guide to Love, Loss and Desperation' is basically Murphy's singing blog, the 'rough guide' to being dumped by women. Sweet Louise is up next, on the school bus ('School Uniforms'), whatever happened to her. 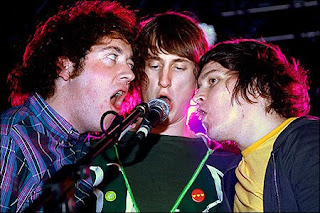 The Wombats are a three-piece from Liverpool. As well as Matthew Murphy, there's drummer Dan Haggis and bass player Tord Øverland-Knudsen, a Norwegian who, a bit like fellow Scandinavian and honorary Scouser Jan Molby, made his home in the city. Both are very adept with the 'Wooo-oooh-oooh' backing vocals but they all appear to be in a hurry to get somewhere and the Wombats blow through Rock City like a hurricane.

At first Murphy's voice doesn't sound that strong, perhaps he's losing it after so much touring or perhaps he's just being drowned out by the fervent crowd, who bellow every word back at him. Thankfully they seem to turn his voice up louder as the gig goes on, hence we get a storming rendition of debut single 'Lost In The Post' where his girl has 'gone where all the letters we write to Santa go'. The poor chap has had even less luck in love than me. 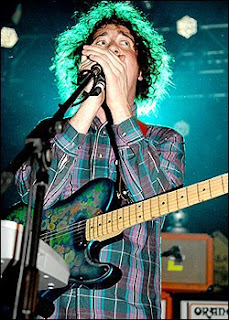 His women and his humiliations come and go, thick and fast. Laura (lost in the forest), Suzanne the GP (she gives you pills and all sorts) and Patricia the stripper, 'this ones about falling in love with a whore.' 'Tricia' goes down exceptionally well tonight, it I can say that, as does a totally rampant 'Moving To New York', with Tord hammering out it's bass line.

I had feared that tonight's crowd would be another bunch of screaming teenage girls, like the Hoosiers, like Scouting For Girls, but thankfully it's not. It's actually a good mix of people who have come to pay homage and go mad in the mosh pit. Murphy asks the crowd if they've got enough water, well they did, but they all keep throwing it up in the air. Please don't give them any more.

I see several people trying to crowd surf right from the back of the floor to the stage. I've not seen that attempted for many a year. Ouch! I've also never seen anyone manage it, they usually end like that poor chap did, falling on his head.

As they launch into 'Little Miss Pipedream', 'she gets hammered and goes home with other guys' and finish off with Murphy's tale of dancing drunkenly on a table with his girlfriend to 'Love Will Tear Us Apart' aka 'Lets Dance To Joy Division'. It's good but it's all a bit predictable, there are no surprises. So far we've had 11 of the 13 tracks off the album and just one other track, a new song, 'How To Pack Your Bags And Leave', and nothing else.

They return for the encore and as expected play the two missing numbers. Disappointingly there's no Norwegian rendition of ‘Postman Pat’, none of their cranky cover versions (Leona Lewis, Take That, Bryan Adams etc) and nothing from the multitude of clever b-sides that they've produced. Not even the excellent 'Derail and Crash', a particular favourite of mine and there's no giant inflatable wombat either. Douglas where are you? One small mercy I suppose. 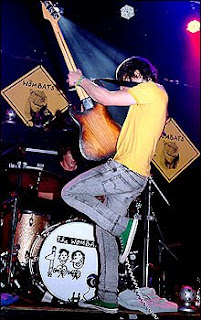 An absolutely stonking 'My First Wedding', Murphy's tale of knocking off the bride, not that he's bitter about it, 'She'll steal your mind first and then your car'. Well I suppose it is Liverpool.

Then finally there's 'Backfire At The Disco', or how not to behave on a first date. Ah I remember it all so well. The song prompts a near-riot, the dance floor becoming one seething mass.

So maybe it's all a bit childish and as you'd expect the band don't take themselves too seriously but Murphy's autobiographical observations on life are genius, all held together by a sharp, catchy sound. The Wombats bring a refreshing touch of humour into a music scene that can sometimes take itself a little too seriously. For sure it's another case of it's going to be a difficult second album and to make matters worse Murphy has apparently now got a steady girlfriend. You're going to have to get her to dump you mate or else what are you going to write about next.

As you may have gathered, L's not a fan, which is why she's isn't here tonight but then she probably can't relate to the songs like I can. She's never been smacked in the face by a girl at a disco, well as far as I know.

It's just a shame it's was all over in around an hour and we're back at Cast, long before L and Son. Another half-an-hour on stage and half-a-dozen more songs and it would have been right up there as one of the gigs of the year. Instead I have to amuse myself with another Bass, which still isn't very exciting. I've resisted buying a 'Wombats' t-shirt, despite the fact that there was a really cool one with a Wombat wearing shades on it, I was sorely tempted but L said she's disown me if I bought one. Oh well.

Did it backfire at Rock City, certainly not.
Posted by FitForNothing at Thursday, May 08, 2008