Friesian Cows, Whatever Next

It's a bit chilly on the legs on the bike this morning, despite it being quite sunny. Still a nice ride though. L's been down the student pick-up joint, sorry, I mean the gym, keeping ahead of me on the exercise score this week.

Oh my. That Petrol Emotion have reformed and are at the Rescue Rooms in August. That’s going to be amazing. I was there for their final gig at Clapham Grand in 1994.

Talking of gigs, L and Daughter are on girl's night out tonight and going gigging without me. However they'll be in the company of Girls Aloud, so I'm not jealous. L tells me of someone else she knows who's going and has bought sparkly ears and a glow-wand specially. Oh no, that says it all. If there's one thing worse than screaming teenagers it's screaming thirty-something's. Still not jealous.

According to the Arena website, support is by Brock Hogan, who according to a Google search is a wrestler related to Hulk Hogan. Sounds intriguing... certainly not jealous. Something to chuck your knickers at I suppose. Not that I'd be allowed to blog it if either of them did.

I bike home and take Doggo on the park while the girls head off to 'party'. On the park, we meet and have a chat with the chap who was running with the silly young collie. His dog turns out to be not half as 'silly' as ours is. Yep, I've been embarrassed by Doggo again.

News from the gig is that Mr Hogan hasn't put in an appearance and instead they get a lycra clad girl band called 'The Saturdays', which sounds more like it but probably isn't.

I collect them from town later and L shows me the skinny 'Girls Aloud' t-shirt that she has purchased. I'm not sure where she pinched the money from, although it was probably cheaper than buying a drink there. It does look rather fantastic, well it would if it didn't have 'Girls Aloud' across the front of it. Hmmm, I suppose it increases the incentive to get her out of it.

I wasn't there but I can still offer you a photo. 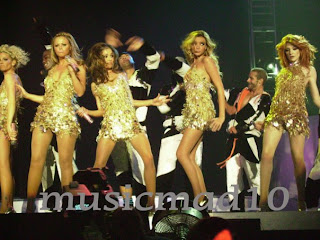 Men dressed as friesian cows, whatever next.

Picture courtesy of Hannah Berry - More here
Posted by FitForNothing at Tuesday, May 20, 2008