We’re up pretty early for a Saturday for saying we haven't got anything 'silly' planned; we're out the house before Daughter has finished delivering her papers although on a Saturday her three rounds do take several hours. This is despite L getting her own back after I might have inadvertently taken advantage of her slightly drunken state last night. Not that we're competitive.

We go for a run down along the canal to L’s work. We are trialling the route, as L is thinking of making this her morning run. It goes well but it's hot and it completely destroys Doggo. Not that this is difficult.

I have a lazy afternoon, reading papers, blogging and cooking up something nice while Daughter takes L to the cinema as another part of her ongoing birthday. Apparently seeing James McAvoy counts as a treat, each to their own.

In the evening its 'delicious' Delays time again. We drive up to Sheffield, which takes only around 45 minutes in all. The Delays are playing at the Leadmill, which is one of my favourite venues. You can usually park more or less outside and so it proves tonight. It's a good job because L's in heels and a skirt.

We just catch the dying seconds of the first band but catch all of main support, Rotherham band The Tivoli, who have brought their own fervent following with them. The band have been together for quite a few years, despite a few line-up changes, and finally have a debut album due to be released. They are competent musicians and good though they are in parts, I feel they're trying too hard to be U2 or something like. They prove that they are well capable of a Dylan-esque rock out but everything seems to go on a bit too long. There are no three-minute gems here, only six-minute epics. If they can teach their songs to know when to finish, then they might be onto something. 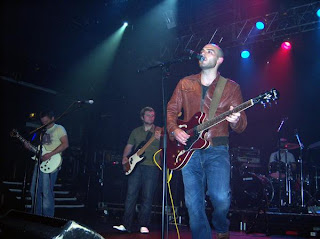 Even after the Tivoli faithful have moved on, there's still a pretty large crowd for the main event, although the Leadmill is still far from full. There's a real mix of ages, some people who don't even look 14, some who look much older than me. Size wise the Leadmill is a step up from the Social, where we saw them in March. It's good to see bands in small intimate venues but the Social is possibly too small, they'll at least have room to move around on stage here. We're fairly near the front and L is worried about crowd surfers but I think she'll be safe tonight. In any case we've left Daughter at home.

Again The Delays road crew takes ages setting up, fiddling with equipment and it's a different chap this time, so it must be in their job description. The PA is again playing 'Raspberry Beret', so that again appears to be the signal for the band to get ready.

Southampton's finest take the stage and play 'Girls On Fire' which is also the opener to their new album 'Everything's The Rush'. Second up is their often forgotten single 'Lost In A Melody' from 2004. A track they released between their first two albums and which didn't appear on either.

The band are soon into their stride in front of an appreciative crowd and treat us to what they describe as 'festival practice' by playing 'Hideaway' and getting everyone singing, clapping and arm waving. It's good to see such an enthusiastic crowd. Recent single 'Hooray' follows and despite the fact that it's a hot sweaty night, the crowd bounce along in time. Gravity defying in the case of some of the girls present. 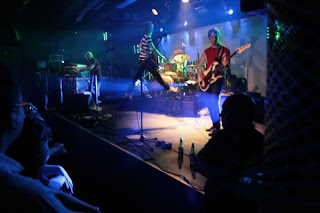 Naturally there's a lot from the new album tonight which seems to boast 'bigger' and happier tunes than the previous 'You See Colours'. Of the stuff we heard in March, 'Touchdown', a song they say they originally wrote as a jingle for foreign radio or something, sounds more joyful this time and 'Pieces' too improves on second listen. Other new tracks such as 'Your Friends Are False' also come over well, although it's hard to spot any 'big' singles among them.

Among the old stuff, it was good to hear 'Wanderlust' played and when they followed it with 'Nearer Than Heaven' the Leadmill was really rocking. L even accuses me of joining in, catching me at a weak moment. 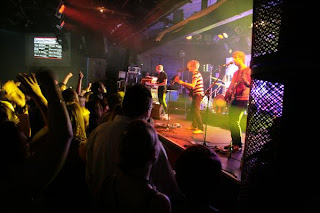 Again they close with 'Valentine', and the place is well ... bouncing.

After the roadie chap reappears for a bit more fiddling, they return to play the same encore as before 'Panic Attacks' followed by 'You And Me'. 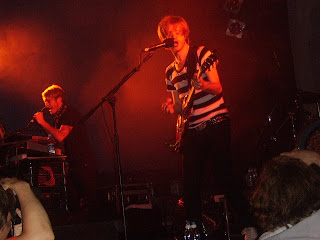 Another good gig. Greg, Aaron and the rest of the band seemed really up for it, on good form and revelling in the extra space of the Leadmill. It was a performance with plenty of passion and energy. Possibly the best way to describe a night with the Delays is 'a happy night' but talking of passion and energy, I get to go home with a girl in heels and a skirt.

Well actually, first we head back to Nottingham, we'd saved up our alcohol units and manage to get to the Ropewalk not long after 11pm. They're open until 1am, so now we can get a few drinks at a relaxing rate which we wouldn't have been able to do before the supposedly unpopular '24 hour' opening was introduced.
Posted by FitForNothing at Saturday, May 10, 2008