We're back at the dog show again today and much to my surprise my knee is a lot better. So there's no risk of me slowing Doggo down, ha ha. We don't hit the heights of yesterday but Doggo still does well. Two clears out of three and a 12th place. All performed in a howling gale.

In the afternoon Doncaster defeat Leeds in the League One Play-Off final, so we won't be playing Leeds next season. 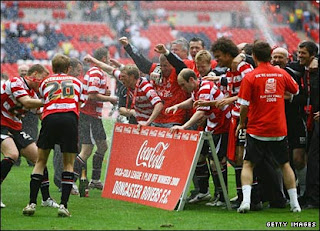 There was a fantastic article in the paper before the game, by a Leeds fan who says he loves it in League One, which he describes as a throwback to the 1970s, where he's remembered what football is all about. This year Leeds have actually won matches and even have local players, that he can relate to, in their team. He has no desire to return to the days of aspiring to be the tenth best team in the Premier League, a league that even a club as big as Leeds can now probably no longer win, where most teams have no prospects other than regular thumpings and a battle for survival.

He says he's enjoyed this season every bit as much as when they made it to the Champions League semi-finals but the best day in his football-watching life came when Leeds clinched promotion at Bournemouth in 1990. The league title followed two years later and, sweet as it was, it was not as good.

We are constantly told that the Premier League is the best in the world and that the Champions League is the pinnacle. It is not true. The best league is the one with your team in it. What football's bandwagon jumpers do not understand is that football is all about pain and suffering. It is the struggle that is addictive, not the success.

Back home, we are naughty and finish off bottle of white wine.
Posted by FitForNothing at Sunday, May 25, 2008