I was hoping Son would be up before I went this morning so that I could wish him many happy returns but no such luck. I shall have to try and catch the evening trip downstairs instead.

L's been wondering whether we should do a special meal to celebrate his birthday but we know what the answer would be if we gave him free rein, needless to say we wouldn’t need to cook anything. Heaven, is being holed up in his bedroom with a whole takeaway pizza to himself. 'Son' and 'celebrate' do not belong in the same sentence.

L pointed this one out to me. The University of Portsmouth has been studying how women's breasts move during exercise. They seem to think this hasn't been done before. Studies, believe me, are on going. 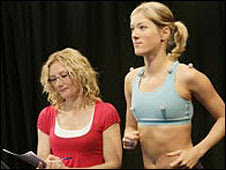 They say they've studied more than 100 women chests. Amateurs, what are they playing at. They've hooked them up to sensors and then got the girls to run. Bet there were a lot of applications from chaps for that job but they gave it to a woman. Equality eh!

My old physics teacher at school had it cracked. He once famously explained Newton's second law of motion to our stunned class of fifteen-year-olds by referring to a hockey match that was going on outside. Ah, happy days. He had numerous 'off the wall' teaching methods, none of which you'd be able to get away with these days.

This new study says sports bra's are failing women because it's not just the bounce that needs to be controlled but also the 'side to side' and the 'in and out'. Also it's not necessarily the degree of movement which is important but the speed, the acceleration and the deceleration. Absolutely fascinating. Roll on Sunday's 10k.

Pub today. I know I shouldn't bitch about other people's lifestyles but... there's this young couple we often see in the pub. He used to work near us and I member him about ten years ago when he was right skinny young lad. His partner is huge and she's clearly been a 'big' influence on him because he's now catching her up in the size stakes. It's not done his looks any good either, he looks at least 40. I hope I look a young 40 (no comments please), well he looks an old 40 and he must be only in his late twenties. Today they were in there with her mother, even huger, ordering cheeseburgers, bacon and cheese melts and the like. No, no salad please, but can we have extra chips. Enough said. The really shocking news is that they now have a baby. Which means he must have... which is too horrible to contemplate.

The other week, Idle Dog, this week Idle Chef. That's the beer selection by the way. Thankfully it's not a premonition, the chef isn't slacking, and the cottage pie is as good as ever.

L finishes at lunchtime and heads off to Rollerball. Good core stability stuff, she calls it. Sorry not Rollerball, its Bodyball. Do they really call it that? Sounds great. Sounds evil.

In the evening squash which is just terrible, terrible, terrible. No further comment required. I leave my victorious opponent to wait for his lift in the rain, that'll teach him to stop putting the ball in the corners.
Posted by FitForNothing at Thursday, May 29, 2008