Such is my Lazarus like recovery that we do a pond and park run this morning. L, who I suspect is trying to outdo me on the injury front, with her old war wound, heads home after 35 minutes but I force a reluctant Doggo to do an extra lap of the park with me.

In the afternoon, L and Daughter head off to a local dog's home to walk some dogs. They leave Doggo with me, which is a relief, kind of, I had suspected that L might try and swap him. Surprisingly, when they return, it is empty handed, although I think they still had a good time.

Doggo and I cut the hedge, which is an interesting experience as it's so windy. Not really a good day to do it but a free afternoon is a free afternoon and I don't get many of them. At least it saves picking up the cuttings, as a lot of them simply blow away. Doggo is very lucky to have any ears left, as he kept dropping his ball at my feet as I was wielding the cutters.

Stockport beat Rochdale in the last of the play-off games, which means that the highest placed team has won through in each of the three divisions; not sure that happens very often.

Another rarity today, must be because it's a bank holiday, is that I watch a DVD at home. Although I like Neil Jordan's films, I probably wouldn't have watched 'The Brave One' had it not been for Jodie Foster's presence. I have always had a platonic fondness for her; we kind of grew up together.

Jodie plays a radio presenter called Erica Bain. One night, she is out walking her dog with her fiancé when three men seize the dog, demanding a reward for its return. When they refuse, they are attacked by two of the men, while a third films the action on a camcorder. Erica is beaten up and is in a coma for three weeks. When she comes round she is told that her fiancé is dead and to her, her life is effectively over, even her dog is missing. The police are not a great help and her way of coping is to buy an unlicensed gun and seek out the men responsible. 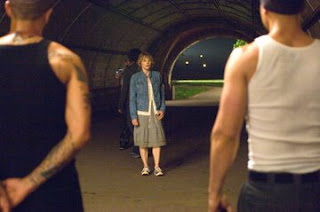 When she is witness to a shooting in a shop and is threatened by the killer, she pulls out her gun, kills him, and walks away. Then she comes across some youths terrorizing subway passengers, when they pick on her, she shoots them dead. So it goes on. The police realise a vigilante killer is on the loose but don't know who it is.

One day she is asked to attend a line-out to identify a man the police think is responsible for her fiancé's death. She recognizes him, but doesn't pick him out. Instead she finds him and the others. She manages to kill two of them but she is stopped from killing the third by the detective on the case, Detective Mercer (Terrence Howard). Instead he lets her kill the last one using his gun, leaving her gun at the scene and so framing them as the 'vigilantes'. Hmmm. Dodgy ending but never mind. 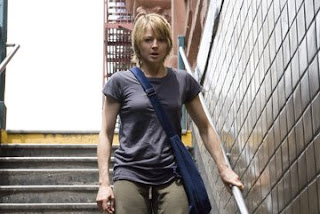 It is really just a standard revenge movie, albeit with a female lead. Although it does explore how grief and violence can change a person irrevocably. Erica herself realises that she is a stranger to herself, that she has reinvented herself as someone else. 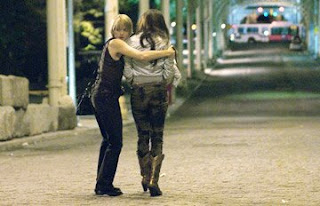 It's a film that sometimes works and sometimes doesn't. Jodie Foster is good, as ever, but not outstanding.

Naughty, naughty for a Monday, we finish off bottle of red.
Posted by FitForNothing at Monday, May 26, 2008