Lying in bed last night, after our early-ish night, L burst out laughing, which is not what a chap usually likes to hear, after a bit of passion but she says she was just thinking of Thursday's blog. Which she reckons will inevitably feature me commenting on a duathlon of Run/Cottage Pie/Run. I think she's writing my script for me.

She's referring to the fact that not only am I running into work this morning but that I also intend to join our company 'training run' tonight, where I've been invited as chief pacemaker. She tells me to try not to intimidate them. I think it’s too late for that. One of them has suspiciously arranged to be in Scotland today.

Today it's pub day as well, so in between these runs it's going to be cottage pie and a pint.

My run in goes well, I didn’t feel particularly fit but I must have been because I broke the 29-minute barrier this morning, that’s 24 seconds quicker than last week. So not exactly saving myself for tonight.

As regards the pub, L tells me to be sensible and have something light. So I do as I'm told and have Giant Yorkshire pudding filled with Irish Stew instead. Ok, so it's not that much lighter but the cottage pie was off. I wash it down with an 'Idle Dog' which is quite funny really; I have one of them at home.

After my misfortune at Caythorpe, I have some sympathy for Britain's David Millar who suffered a snapped chain while in the leading group with less than a kilometre to go in stage five of the Giro d'Italia. He didn't quite have the self-control that I did and he threw his bike into a ditch in frustration. Believe me I was tempted.

Ok so here goes, Run/Giant Yorkshire/Run, part three. Exiting T2 (transition), which is our upstairs toilet, we set off on our run. Another colleague has bottled out, excuses of a gum circuits session, while another one has simply disappeared. So there are just two of us. I go off a little too fast and have to ease up when I hear him spluttering, I don't want to lose him, or kill him. Surprisingly it goes well, at least for me; my lunch isn't about to reappear and my legs feel ok. I blast around the 6km in 24.01, my colleague staggers home thirty seconds behind, a whopping two and a half minutes quicker than his previous best. The bar has been well and truly lifted. He staggers around the car park, gasping what I think is his thanks. Someone rushes out the office with a pint of water for him.

I don't fancy jogging into town but I'm running late to catch the Red Arrow, so needs must. Doesn't work though, I'm a little late and miss it but had it been on time it would have passed me, no sign of it, must have gone early again. I get the R4 instead.

Get home and Daughter is out, having finished her papers in super-quick time, she will be so fit. She's headed off to Pizza Hut, ah perhaps not so fit then.

After I get home we take Doggo across the park and end up at the Rodney. I'm thrilled to see Marston's Merrie Monk on the bar, their classic strong mild which they have briefly brought back. Although at 4.5% I'm sure it isn't as strong as it used to be but I was still really looking forward to it. Unfortunately the bar staff served me something pale, cloudy and with hops floating in it. It tasted like Directors on a bad day, it certainly wasn't a mild and it certainly wasn't Merrie Monk. Naturally the staff swore it was, it might as well have been dog beer. 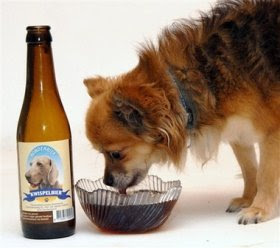 I can’t see our old fool liking it but who knows, he’s a weird creature. Wonder how many of the owners have had a swig themselves. It's non-alcoholic, so it would make an interesting AF night.

Traumatised by the Merrie Monk debacle, we move along to the Willoughby where they don't have any beer at all, so we head home. Not a good night. So we crack open a large bottle of Leffe to drown our sorrows with and to wait up for Daughter, who naturally has no credit on her mobile, so can't keep us informed. It makes a change us waiting up for her.

To cap it all, Leeds sneak another last minute goal to win in the playoff game. Damn.
Posted by FitForNothing at Thursday, May 15, 2008