I stand corrected. I didn't take home a girl in heels last night at all. As L points out, the one I took home had flip-flops on. Must have swapped girls mid evening. It happens I suppose or perhaps L swapped her shoes to walk home.

Groundhog day for Doggo, or should that be Grounddog day, as we run along the canal again to L's work because this is where we abandoned the car last night.

At lunchtime Daughter departs to the 'Give It A Name' festival in Sheffield with a friend and her friend's father. Two teenage girls and 14 bands, only 2 of which I've heard of, over nine hours, he's a brave man.

I go off to finally bury the corpse that is Derby's Premier League season. Cue another thumping, to a poor Reading side, who also bite the relegation bullet. Possibly the worst performance of the season, although there’s been so many, it’s difficult to be sure. Afterwards the club wanted the players to do a lap of ‘appreciation’ to thank the fans for their loyal support but the supporters wouldn’t let them. The fans made it very clear that they don’t want any of those players to take the pitch next season.

The club also scandalously abandoned the player of the season award, I know it's been a bad year but you just can't go around scrapping awards like that.

In the evening we head to Broadway and feast on Jambalaya as its Cajun night, drink mango juice, oh and I have three coffees. Well, we had one each and you get a free refill but L didn't want hers, so... At least there's no chance of me dozing off during the film.

Despite all that liquid I'm not nipping in and out of the cinema, unlike the weak bladdered students are. I bet these are the same folks who can't stand still at gigs.

'Persepolis' is the film version of Marjane Satrapi's autobiographical graphic novels and recounts her life up to the age of 24. It’s filmed in the same style as the novels and is therefore an animation in 2D, mainly black-and-white. None of your big budget CGI here. Satrapi even co-directed. It is made in French and as usual I found the subtitles a little fast at first but I soon got the hang of them.

Marjane is the daughter of a fairly well off couple in Teheran. Persepolis is what the ancient Greeks call Teheran. The film is, if nothing else, a good history lesson. We learn how the Shah first came to power, with the British government's role in manipulating the situation for the sake of oil depicted as a puppet show. Her family are supportive of the revolutionaries fighting against the Shah's regime but unfortunately rather than the hoped for revolution, once the Shah is deposed he is replaced by the fanatical religious regime that is still in power today.

As she grows up she becomes an avid collector of Western culture, particularly of music and collects bootleg heavy metal and punk. Everything changes though when her uncle is executed by the regime and bombs destroy her neighbourhood as the country gets embroiled in the seven-year long Iran-Iraq war. 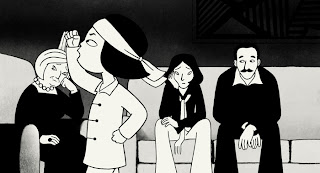 She is a precocious child and as she gets older, her parents worry about her outspokenness, as she protests against the regime at school and in other public places. So, for her own good, her parents send her away to complete her education. 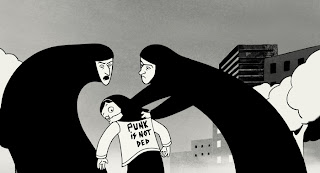 She spends her teenage years in Vienna, where she befriends a group of misfit students and enjoys the usual tribulations of being a teenager. She doesn't though feel that she fits in and returns home, where the regime is getting ever more repressive, and where all the women must wear the veil. 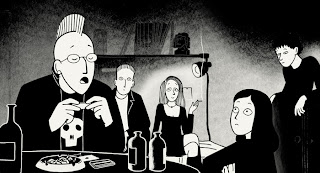 The 'star' of the film/cartoon is probably her wise old Grandmother, who has seen it all. She coaches Marjane in life; tells her to always have integrity, not to compromise and to never give in. She is the moral voice of the film.

Things don't work out back home either, she gets married, but it is a mistake. Eventually her parents again persuade her to leave. She goes to France, where she has remained ever since.

The story is always interesting and often darkly humorous, while the approach to telling it is original, if a bit quirky. I think the simplistic animation re-emphasises that the story is told from a child's point of view and works well. Although the situation is simplified you still come away feeling educated. It's never sentimental and doesn't preach. You also come away feeling that you've got to know Marjane Satrapi. Highly recommended.
Posted by FitForNothing at Sunday, May 11, 2008