There's Nothing Wrong With A Bit Of Frolicking

Now we already know that the majority of white vans aren't equipped with indicators. A case proven this morning when a particularly large white van careered across two lanes to park up at the side of the road without having to resort to the use of those little yellow flashy things. The manoeuvre caused quite a few motorists to do a double take and slam their brakes on. It also came as a bit of a shock to the cyclist the van nearly wiped out (me!); luckily, he's quite an alert cyclist.

Overall, it was quite a traumatic morning. I had problems 'unclipping' my right foot to walk across the A52 bridge. When I finally got my foot out, the entire cleat fell off; one of the two screws seems to be missing. Somehow, whilst this struggle was going on I managed to dunk my other foot in a pile of dog mess. As I say, a traumatic morning.

A Norfolk farmer has been struggling to come up with a method effective enough to scare the birds away from his crops. Then he hit on an idea, so terrifying it was sure to work. He called in Amy Winehouse. Well obviously not the real one because she's too busy in rehab, but he based a scarecrow on her and it worked a treat. He says that 'the pigeons are terrified; they're sitting up on the telephone wires too scared to come into the field'. 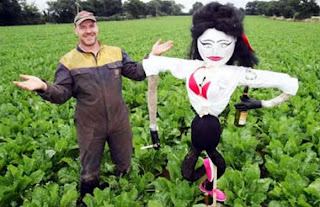 What's really scary is that this isn't the only Amy Winehouse scarecrow around at the moment... 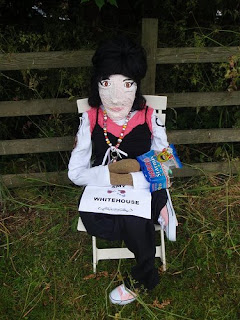 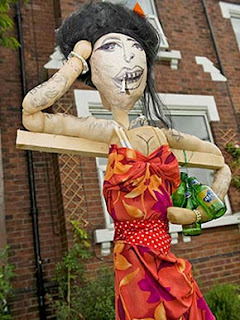 Despite a typically British summer gale, it's not a bad cycle home, wind assisted. Over lunch, I managed to do some repairs to my cleats, so at least I had two feet available for the ride home.

In the evening, we amble across the park to the pub with the two dogs, giving Mini Doggo his first park experience. L describes it as more of a frolic than a walk. Of course, there's nothing wrong with a bit of frolicking. After a few rather nice Elsie Mo's, we frolic our way back home.
Posted by FitForNothing at Friday, August 01, 2008