I wake up to the sound of heavy rain. Good intentions are quickly consigned to the bin, along with MD who has his head in it, chewing the wickerwork.

So no biking. I pick up a paper and it's all the more galling to see the headline 'Survival of the fittest'.

It's another article about the fact that running on a regular basis slows the effects of ageing. People who run are half as likely to die prematurely or develop disabilities. On average, if disabilities do occur they usually appear 16 years later. 16 years! That's a massive difference, well worth running for.

There is also no evidence that runners are more likely to suffer osteoarthritis or need more knee replacements than non-runners. It doesn't however say anything about cyclists...

I love the Olympics. At work, we're positively gripped to the canoeing, yes the canoeing. This is the white water stuff around the weaves poles, which must be a lot easier without a dog. A collie-less David Florence grabs a silver in the C1. 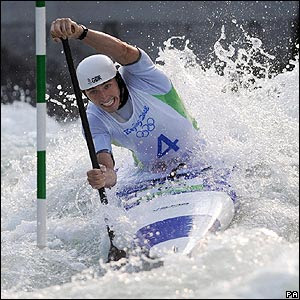 Later, the horsies get a couple of bronzes in the three-day eventing. L describes them as a sexy bunch. That's the men, not the horses, she points out. Although not sure if she means the Brits or not. Has she got the hots for William 'Foxy' Pitt, he's the only man in our team.

None of this, though, is as gripping as the badminton, where there isn't even a medal on offer yet. Gail Emms and Nathan Robertson overturn a 17-12 deficit in the third and deciding game against the Chinese second seeds. They bounce back to win 21-19. Fantastic stuff. So un-Andy Murray. I'm sat in Sainsbury's car park listening to the conclusion of it. Bizarrely, I was the only one high-fiving the shop assistants once I got inside. 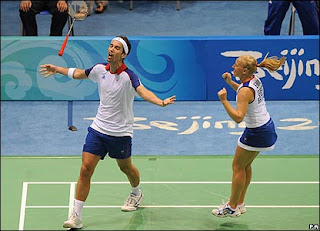 Enthused by Derby only conceding one goal on Saturday, I finally bite the bullet and get a ticket for the cup game against Lincoln tonight. To be fair, Derby are much much better and play some good football. They dominate the first half and have countless chances but in true Derby style cannot score. Straight after half time, in true Derby style, they concede a soft goal and morale collapses. The game drifts until Derby somehow scrape an equaliser eight minutes from time. This buoys them up and although they don't manage the winner in normal time, they prevail 3-1 after extra time, thanks to a hat-trick from our new hero Nathan 'Duke' Ellington.

We hope that this a turning point.
Posted by FitForNothing at Tuesday, August 12, 2008