I start the week full of good intentions. I'm only in work for three days this week and I intend to bike all three days. So a quick warm-up and then onto the bike.

The roads are quiet and it's quite an easy cycle. I have a better morning than L, who renders herself blind in one eye by ripping a contact lens at the swimming pool. She reckons she walked into a parking meter on the way into work, Doggo's been doing that for years.

News filters through that Daughter is a bit hacked off with number two dog, so much so that she's 'walked his legs off' on the park. It worked because apparently he's now asleep.

Britain take their second gold of the Olympics as Rebecca Adlington makes a sensational late surge to come from miles back to win the 400m freestyle in the pool by just seven 100ths of a second, with team-mate Jo Jackson claiming bronze. She becomes Britain's first female Olympic swimming champion for 48 years. Her time of 4:03.22 is less than half my time for the same distance in a triathlon and probably about how long my transition takes me. 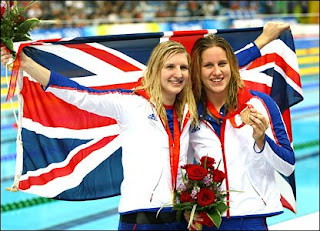 In the evening, I take Doggo and MD on the park. MD tries plunging into lake, like he did at the weekend. This time I have him on the lead, so I let him keep doing it until he's had enough. Anything to help him wear himself out.
Posted by FitForNothing at Monday, August 11, 2008