Up at Chesterfield today for one of the lesser dog events. The dog that doesn't weave gets 4th place in 'Wicked Weaves' event, in which he has to do three sets of twelve weaves. Amazing. We then get 4th in both the jumping and agility events.

They tend to dish out photo frames as prizes here and L says we need something to display a photo of MD. I would have thought the preferred method of displaying a photo of MD would be a dartboard but obviously his little self must be in vogue at the moment and we might therefore be keeping him. Probably because he's with me and not at home.

Finally in the last event, we do the deed, break our run of 4th's, get second place and the promised photo frame. Whether Doggo will like his prize being used for the little one, I'm not sure.

Overall MD has a great day. Whilst we were out for a walk between events, MD attempted to join Doggo in a stream, where he was stood having a drink. MD launched himself off the bank and belly flopped into the water, which was about chest deep on Doggo, and promptly disappeared from view. Just as I was about to wade in and administer Doggie mouth to mouth he emerged like a bouncing bomb, coming towards me and seemingly eager to do it all over again. I restrain him; he's so unlike Doggo, totally fearless. Chalk and cheese.

I am the only one clustered around the radio as Nicole Cooke shows plenty of guts and desire to win Britain's first gold medal of the Olympics on the treacherously wet roads around Beijing. 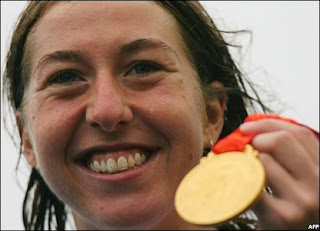 Terrific stuff from her but road racing is very much a team sport and all credit too to her two teammates, who haven't really been given the credit they deserve. Sharon Laws and particularly Emma Pooley who were prominent near the front for most of the race. They set the pace and took the sting out of some of Cooke's rivals. Cooke meanwhile was able to save her legs until the last climb when she made her move.

Home for a bit of R&R with L and to pop the cork on a celebratory bottle of Rose. The two dogs and I are well knackered but whereas they crash for the night, I manage to drift in and out of consciousness as we watch a dodgy DVD that L has acquired.

She has got hold of a DVD of the Magic Toyshop. Not that it's available on DVD but she's found a site that transfers videos to DVDs. I’m not sure about the legality of doing this but that's their problem, not ours.

The story concerns 15-year-old Melanie and starts interestingly with her preening herself naked in front of a mirror. Later though, when the climbing the apple tree naked scene comes in, it's done fully clothed. These people do take liberties with vital plot elements when they convert books to the screen.

After her parents are killed in a plane crash, Melanie, along with her younger brother and sister, are sent to live with their Uncle Philip (Tom Bell) and his family. This family consists of his mute Irish wife and her brothers, Francie and Finn. He rules authoritarian like over all of them, although once his back is turned; they indulge in forbidden pleasures, such as dancing and drinking.

He is also a toymaker and owns a toyshop. He puts on surreal and often violent plays with his life like puppets that his family have to watch. He soon gets Melanie to take part in these productions alongside the puppets. He asserts his dominance over his wife by making her wear a silver collar whilst she watches the shows. L tells me, that in the book, this isn't the only time he gets her to wear it.

Finn develops a 'thing' about Melanie and in particular her long dark hair. Although he doesn't repeat the cool chat up line from the book:- 'You've got lovely hair Melanie, black as a pint of Guinness; black as an Ethiopian's armpit.' That'll work down your local pub.

Finn likes her hair down and doesn't like it in the braids she seems to prefer but she's probably just doing it to be a tease. They go on to develop a relationship of sorts, helped or possibly hindered by her Uncle who gets Finn to rehearse the part of a swan puppet that will molest Melanie in his next play.

Many strange and surreal events go on, things that I often lose track of and which often hint at things that only reading the book can explain. Thankfully, I have L on hand to explain these to me. Through these happenings, Melanie discovers more about her adopted family including their incestuous secrets and that her aunt isn't mute after all.

It all ends happily with the Uncle being depicted as a dummy and being burned on Guy Fawkes Night.

The story is totally bizarre and all terribly immoral, perverse and wonderfully un-politically correct. Which may be why it's been so hard to get hold of. It was made by the Granada TV network and screened on television before having a limited theatrical release. It is also, from what I can gather from my limited exposure to her books, very typical of Angela Carter, who wrote the original book and wrote the screenplay of the film.

All good family fun.
Posted by FitForNothing at Sunday, August 10, 2008