Don't Let Your Dog Swim In The Lake

L doesn't have much luck with last night's conquest; he sneaks out at some unearthly hour, to a dog show. He also has a bad head. Why? I was only drinking Mild.

Three easy courses and one difficult one today. The difficult one has right hand weaves which naturally we mess up. The other courses go ok but they're too fast for us, so we're not hopeful of any good placings. We do find out that we've come 4th in the Dog Of The Year league. Which is not too shabby.

The fearless one, MD, again takes himself off for a swim and dives head first into the lake. Daughter asks later why I didn't video it on my camera. Hmmm, I was too busy getting ready to wade into save the reckless little scroat. As it happens he does near perfect doggie paddle back to the bank and looks thoroughly pleased with himself.

There are signs up saying 'please don't let your dog swim in the lake' and I have to walk this dripping wet thing, with a 'that was so much fun' look on his face, back to the car.

The advantage of today is that all four events started simultaneously at 8.30am in four different rings. We're all done by 10.30 and it only took that long because we took our time.

Then I hang on for three hours waiting for the results whilst they run some finals that we haven't qualified for. In the end I get sick of waiting and I go home to the girl that I abandoned this morning. She's out at the gym but I manage to corner her when she returns.

Later we head into town, to the cinema to see a film called 'Elegy' but we get the times wrong and end up seeing 'Somers Town' instead. Which we did also want to see.

Through our membership of Broadway we have some free tickets and also some BOGOF drinks vouchers, so it's a good night all round and cheap.

The film is sponsored by Eurostar and was originally conceived as a plug to mark the train service's move to the new St Pancras International station but when they asked Shane Meadows to make it, I think he got carried away.

What they got was another typical gritty Meadows' coming-of-age story that looks small budget and is shot almost completely in black and white.

Tomo, played by Thomas Turgoose, the star of Meadow's 'This Is England' has runaway from Nottingham and ends up in London, or more precisely the district of Somers Town, the area between Euston and St Pancras.

Tomo isn't as tough as he seems to think he is and within minutes of cracking open his first illegal lager, he gets mugged by the local lads, as well as getting a good kicking. Typical Meadows stuff.

Tommo refuses a sensible offer of a train ticket and instead meets the shy reserved Marek (Piotr Jagiello), a Polish immigrant, who is his polar opposite. Marek spends his days taking photographs and trying to occupy himself while his father works as a builder on the new station. 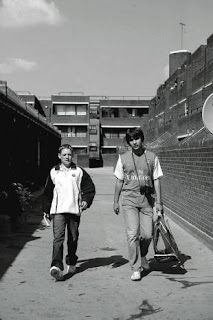 Somehow, despite Tomo stealing Marek's photos, they form an unlikely friendship. Most of Marek's photos are of the love of his life, a sexy French waitress called Maria, who he barely knows. Tomo quickly shares his appreciation of her. Although Maria is clearly a lot older and wiser than both of them and well out of their leagues. 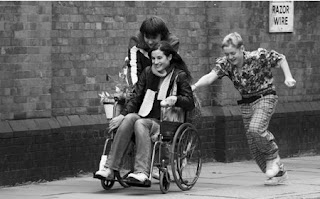 Tomo has nowhere to stay and hides out in Marek's bedroom, surviving on scraps from his meals. It is all kept secret from Marek's father, Tomo is even persuaded to do his number two's in a plastic bag so as not to be discovered. That is until the boys get riotously drunk and are found out anyway. 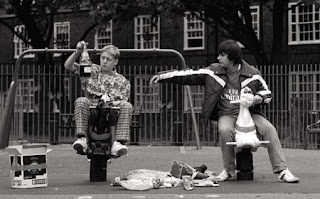 Tomo also has nothing to wear but stealing clothes from the local launderette doesn't help and leaves Tomo dressed as (in his words) a 'female golfer'. Poor old Marek meanwhile is given a knock-off 'Terry Henry' Arsenal shirt by the local wide boy, a chap called Graham, who keeps him money in his thong.

The film meanders to no conclusion in particular and ends with Maria back in Paris and the boys in pursuit, via Eurostar and the film bursts into colour.

As usual with Meadows, a pleasant thought provoking tale. Not one of his best but still very watchable.
Posted by FitForNothing at Sunday, August 24, 2008