I Know All About Poverty...

We both skip the deathly early 7am cardio this morning, so get chance to have lie-in instead. I consider replacing the session by doing the bus and run option to work but in the end take the car, so that I can be back in time to take Doggo on the park tonight.

I shall bike tomorrow instead, that is if L can pick up some White Lightning for me. She says it sounds like a tramp's breakfast or as the Sun says Amy Winehouse's breakfast. It's a bit embarrassing that my beloved is admitting to have read the Sun. By the way, White Lightning is bike chain lube, not the cider stuff.

Last year I took part in Blog Action Day where everyone had to blog on the same subject. Last year it was the Environment, this year it's the much trickier subject of Poverty. On the surface of it, I know all about poverty... two kids, two dogs etc etc. I could go on about how I'm always broke and hows L's even worse than me but I'm not sure that's what they want. I've got until October 15th to think of something profound.

In Beijing, we're back on the gold trail. Sailors Iain Percy and Andrew Simpson win Britain's 17th in the Star class, whilst David Davies picks up a silver in the 10km swim and Phillips Idowu's the same in the triple jump. 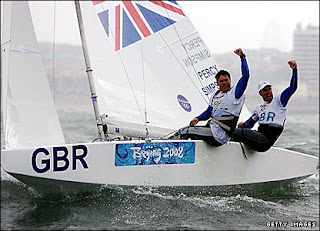 A horrendous storm rattles the windows at work. Ideal tennis weather. Although I have a game tonight, the rain is probably just for Daughters benefit, she should be out on her paper round about now and it always rains for her. I just hope she hurries up, so that it has time to fine up for my game.

I get home and take the dogs on the park but they are so disobedient on the lead that it takes us nearly fifteen minutes to get there. By which time, it's almost time to come back.

I get to tennis with seconds to spare. Since I beat my opponent a few weeks ago, we have to play to his rules or else we'll end up back playing squash and I prefer tennis. The rules are we have to use his balls which don't bounce very much, I have to serve like at least a 13 year old as opposed to an 8 year old and I'm not allowed to drop the ball gently over the net because he thinks I'm miss hitting it. I'm not, it's the only clever shot I can play. All my other good shots have gone out of the window since they shortened the courts and overstrung the racquets, or that's how it seems.

It's actually a very entertaining game because I was trailing 5-1 in the first set but then I have a bit of a renaissance, which snowballs quite nicely as he loses his rag and suddenly after five games in a row, I'm 6-5 up. Doesn't last, I lose on a tiebreak. I lose the second 6-3 and we're tied at 2-2 in the third when bad light stops play. We're too tight to pay for lights.
Posted by FitForNothing at Thursday, August 21, 2008