Did He Hang Them On The Wall Above The Fireplace?

I'm on the bike this morning, to work off those bank holiday excesses. The council workers seem to be taking the opposite strategy, sleeping it off, as the park is locked and quite a long queue of dog walkers has formed by the gate. I scan it for L but she must have taken the boys around the University instead. Good call.

The cycling is hard; it's very windy this morning. I get to work and fire off the usual 'Hi, I'm safe and sound' email to L. Of course, as far as she knows, I may have figured out how to send emails remotely from the ditch I’m lying in.

Daughter takes MD on her paper round with her. It's either a case of getting her retaliation in first and wearing him out before he can cause trouble or perhaps she just intends dumping him in a bin somewhere.

I get stuck in a long meeting for most of the day. The people have some down from Perth but have flown to Manchester, so their day's going to be even longer. We get the dubious treat of lunch at Starbucks. Latte's and huge muffins everywhere and that's just the customers.

I get home and kick the dogs around the garden for a bit before we head off for another freebie film at Broadway. Daughter goes to the cinema too, to see Hellboy 2 but I think we get a better deal. This time we do get the times right for 'Elegy'.

'Elegy' is based on Philip Roth's short novel 'The Dying Animal'. Which really makes you wonder why they called it 'Elegy'? Because as film titles go, they don't come any better than 'The Dying Animal' where as an 'elegy' is a poem about mourning or something like that.

David Kepesh (Ben Kingsley) is a professor of literary criticism, and is probably around 60 years old (my sort of age). Lecturing to his class, he assesses War and Peace and explains that you bring yourself to any work of art. You see it through your own eyes, through your own situation, with your prejudices etc but whatever your thoughts on it, the work will live on well beyond your thoughts on it. This is an essential theme of the film.

Kepesh may be a respected college professor but he's also a bit of a lecherous old man (well aren't we all) who lusts after his female students (don't we all). Kepesh though appears to be a bit of a success on this front (the swine) but he thoughtfully never attempts to bed any of his students until the final grades are in, when he throws a cocktail party for them and all previous rules are suspended.

Kepesh knows he's an old git with an aging body but he doesn't want to grow up, his mind he reckons still functions as a teenager. Hang on a sec; I can relate to that sentiment but no one would seriously want to be stuck with the mind of a teenager. Heaven forbid. Mid twenties would do me nicely please.

This term's lucky target for seduction is Consuela Castillo (Penelope Cruz). Consuela is a doe-eyed student considerably younger than Cruz herself is but she scrubs up well for it. In fact, she looks great, even with her kit on, and her acting is pretty good too. I have had no time for any of her previous films. Both L and I thought the much touted 'Volver' was rubbish. As for her so called beauty, it's never done anything for me.

The suave Kepesh successfully woos her with flattery, charm, a bit of theatre and some tinkling on the piano. Which is all very annoying because it works; and he promptly falls head over heels in lust with her. So it's another film about old men's fantasies about getting it on with women thirty years their junior. So let's suspend belief, well maybe not. It's no more unbelievable than an OAP like Max Mosley, entertaining five girls in the middle of the afternoon. 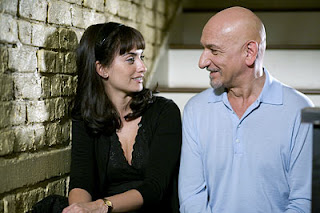 They embark on a passionate relationship but Kepesh is realistic and knows it won't last. Therefore, there's little chemistry between them only sex. Thing is Kepesh doesn't usually care if it lasts or not because he shuns commitment anyway, when one of his students inevitably leaves him for a younger model, he just charms another one.

In fact, to fill any gaps Kepesh has a regular-ish shag lined up, three weekly I believe the arrangement was, with Carolyn, a business woman (Patricia Clarkson). They seem well suited but surprisingly, given their arrangement, she gets annoyed when she realises she's not the only dish on his menu.

This time though, his desire for Consuela clearly destabilises him and his cynical façade begins to crack. His friend, award-winning poet, George (Dennis Hopper), we also get an appearance by Deborah Harry as George's wife, comes out with the nugget that 'beautiful women are invisible' because we don't get beyond the 'beauty barrier'. Like admiring a work of art, we see in another person what we want to see. In his case, Kepesh sees the sexual side of the beautiful Consuela and fails to see the person underneath. Bringing his prejudices into it, just like with War and Peace. 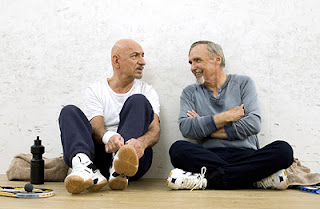 He is so blinded by his infatuation that he starts behaving like the teenager, he says is still in his head. To the point of ducking out of attending functions with Consuela and avoiding meeting her parents. I find this a little hard to believe, surely, he's mature enough to not care whether they disapproved and of course, they would. Why should he care if it all ends in tears when he's convinced it will do so anyway? What will be will be. It's an imperfect relationship but aren't they all? The result of not attending her graduation party is that he doesn't see her for two years.

Kepesh also has an estranged 40-something son Kenny (Peter Sarsgaard), a man married with children, who appears on the scene to tell his father that he has been having an affair. Kepesh is too involved in his own predicament to bother dishing out advice or sympathy. Even though he's done plenty of what his son calls 'serial tomcatting' when he was married to Kenny's mother. He left his son and wife many years ago and Kenny has never quite forgiven him.

Cruz is very free with her flesh throughout the film, and when Consuela reappears, her breasts become even more central to the plot. She tells Kepesh that she has breast cancer and expects to lose one of them in the operation. This upsets her because she feels that she will no longer be beautiful. Does she return to tell to Kepesh because she knew his desire was for her body and not for her? Is her beauty all that matters to her? Will he still want to read War And Peace with the best bits ripped out? Or can Kepesh now see beyond the 'beauty barrier'? It's very un-PC these days not to say 'its ok love it doesn't matter what you look like'.

I can see it coming and he asks him to photograph her breasts. L thought she just wanted to get down and dirty with him again, tut tut she always lowers the tone, but they probably did anyway. What he did with the photos I'm not sure. Were they for her or for him? Are they hanging on his wall above the fireplace? 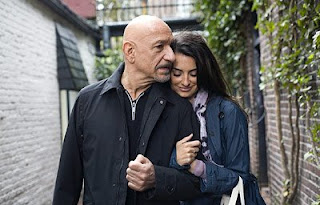 The ending is inconclusive, we see a couple on the beach. Has Kepesh made a late conversion to true love? I'm not sure.

This film is going to have so many critics because of its subject matter and because of the way it was told, in a slow, pondering character based way. The film takes its time telling its story but I like that approach.

In my opinion, it's a cracking movie that I thoroughly enjoyed. There are sublime performances by Kingsley, Cruz’s nipples, and even a pretty good one from Penelope herself. Never thought I'd say that.
Posted by FitForNothing at Tuesday, August 26, 2008