Good Job It's A Docile One

I cycled in this morning and the weather was a real pain, it just couldn't make up its mind whether to rain or not. It was also a frustrating ride because I could see a chap up the road on his bike but I couldn't catch him. I managed to close the gap on him a bit but that was all. He was also barely pedalling up the hills, so he must have been pushing a really big gear.

Of course had I caught him that would then have presented the age-old problem of whether to go past him or not. Once you pass someone, you have to stay ahead which can often use more energy than the catching does. I get to work creased and have to have extra porridge to get my strength back.

In the Olympics, there's another medal for Nottingham's National Water Sports Centre at Holme Pierrepont; canoeist Tim Brabants powers to gold in the final of the men's K1 1000m. Which is our 18th gold. It's a shame the Water Sports Centre is rumoured to be closing once the new one for 2012 is built down south. 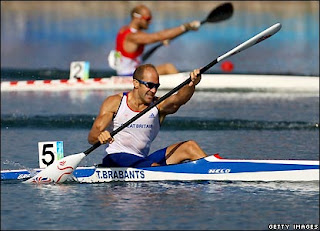 Dave Brailsford's GB cycling team have already shown what good organisation and planning can do for the team in the velodrome but how about this. His team have rebuilt the Beijing BMX track in Manchester, so that Shanaze Reade could practice on it. What's more it's available for the youth of Manchester to use. Unfortunately, Reade falls off when lying in the silver medal position, refusing to settle for second best.

So Shanaze fell but Heather Fell, didn't. In fact, she got a silver in the modern pentathlon. She may not have won but she's still worth a photo. 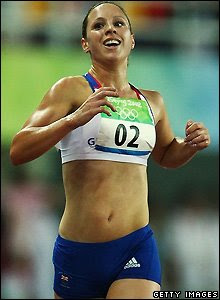 I cycle the long route home, warning L so that she doesn't call 999 when I'm not home at the usual time. She suggests meeting me at the Victoria, just so that I have to sit there all night in my cycling shorts. Hmmm. Interesting idea but can you imagine the stress of having to walk two dogs all the way to Beeston on her own. Lots of alcohol units.

So I head home and we walk them over together. MD copes very well with the walk but is well gobby in the pub, picking on an Alsatian four times his size. Good job it's a docile one.
Posted by FitForNothing at Friday, August 22, 2008