Back at work today and back on the bike. It's a necessity really, because although it's been a brilliant weekend away and we've had some excellent meals out, it's not exactly been healthy stuff. Five a day? err no, well not of the green and fruity variety. Chips three days in a row, along with countless desserts, cheeseboards, ice creams and too much rather nice wine. It's not really the way to maintain my position at the top of the anti-fat league.

It's wet out on the roads, although not actually raining whilst I'm cycling but it is very windy and gives my legs a good work out. First portion of chips can now be chalked off.

L emails to say it's awful being back at work but she's not looking at the bright side. Such as not having an over exuberant puppy attached to her trouser leg.

Talking of MD, he had a great time on holiday, yapping at everything that moved and many things that didn't. One thing that certainly did move was the eight-year-old girl he chased across the beach on the last day. She was very quick for a youngster, definitely potential 2012 material. When we'd finally extracted our highly-strung young collie from around her ankles, L gave the girl a very good lecture on how to deal with a 'ferocious' four-month-old puppy, basically stand still, oh and don't wear lacy ankle socks. He seems quite taken with them. He's so human.

MD's swimming hasn't really come on though; he seemed reluctant to venture into the sea although Daughter did give him a thorough dousing on day one.

Daughter nearly ended up bivvying, unintentionally, when her tent started to fall apart. It was subjected to too much of the highly romantic early morning wind and rain, not that L and I noticed in our superior tent. What do you mean why are we giving Daughter the dodgy tent? Isn't that what all responsible parents do?

We can't really complain about the tent, it's done good service. We purchased it for our trip to Iceland 11 years ago and it's done sterling service across some rough terrain in the hills of England, Scotland and Wales.

L's off out at lunchtime to attempt to win us the lottery with the pound she has left. Hmmm, yes it did turn out rather expensive, for saying we were doing things on the cheap, in true credit crunch style, by camping. So, if she wins, we'll be able to get a new tent and then Daughter can have our old one!

Luckily, each day the rain gave way to nice sunny afternoons and evenings; that is after the morning peace had been broken by a gobby puppy. Who then handed the baton over to the stroppy older dog in the evenings, who growled at all the other dogs.

I'm not allowed to mention whether anyone had any fainting fits, particularly those into bags of chips.

So, a good weekend, although things didn't start out quite as well as we'd hoped because we didn't depart as early as we intended. We spent the morning trying to get Son onto a new A Level course. Seemingly, according to the examination board, technical and scientific disciplines are not his boat after all and it's a life of literature, law and sociology that beckons instead. We hope. Second time lucky.

After work, I cycle to the pool. So that's the second portion of chips dealt with, now all that is left is to take issue with Friday night's Battered Haddock in the pool.

It's been another good day in Beijing. Gold medal number thirteen arrives in sailing courtesy of Paul Goodison in the Laser. 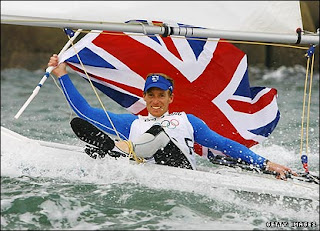 Then it's back to the track where it's so easy for Vicky Pendleton in the Women's Sprint and number fourteen arrives. That's seven golds in cycling and now she has to bake Hugh Porter a sponge cake. Apparently, cycling and taking her clothes off aren't the only thing she's good at. 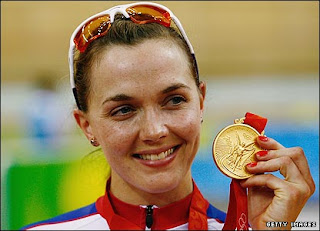 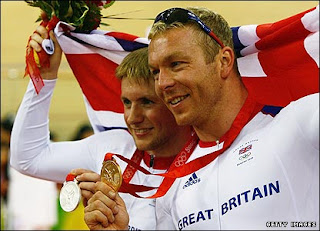 Even Athletics is finally onto the medal table. Germaine Mason, albeit a Jamaican defector, takes unexpected silver in the high jump. This tees things up nicely for Christine Ohuruogu. Whom we all thought would probably get a medal of some sort but probably only she believed that Gold number sixteen who have her name on it. 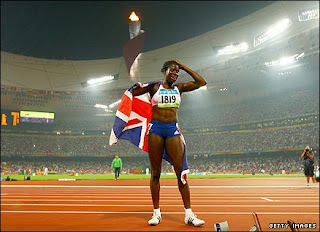 Back from my swim, L's at Sainsbury's so I take the 'boys' and go meet her. First, we all wander along the canal towpath where MD again tries to drown himself. Luckily, I've kept him on the lead so that I can reel him back in. Perhaps I should invest in a life jacket for him.
Posted by FitForNothing at Tuesday, August 19, 2008