The weather relents and I have a very good cycle in. A very fast one too, I had to get a move on though because L made me late but it was worth it.

Impressive though my ride is, it's not a patch on that done by Emma Pooley, who wins a silver medal in the individual time trial in Beijing. It's a just reward for Pooley, who worked hard to help Nicole Cook win gold in the road race on Sunday. The medal was seemingly a surprise to everyone except her coaches and herself, who saw that the course suited her hill-climbing abilities and launched 'Project Pooley' to try to get her a medal. They built a special small-framed bike with special handlebars made climbing. Then they gave her videos of the course, which she could watch repeatedly at home, so that she could learn it inside and out. Even this wasn't enough with Pooley out there in China practising on the course in the depths of winter when snow lay on the ground. I'm surprised the Chinese even let her in to do that.

The organisers had so little faith in her that they sent her off fifth, with all the favourites going much later. This apparently left her 'a shade miffed' and probably helped motivate her. 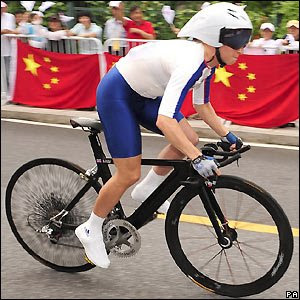 Pooley will no doubt get her five minutes on the evening highlights programme on TV, whereas some American swimmer, who may or may not get eight gold medals, will get his usual daily twenty-minute slot. What is it to us what the American's do? I'm sure plenty of top athletes over the years could have achieved huge medal hauls if the IOC were good enough to give them eight opportunities to do so. It must really annoy some of the other sports who are having events cut out of the programme to make room for new events. There are 34 swimming medals up for grabs at this Olympics. Athletics tops this with 47 but at least they have track and field, which includes a mix of disciplines: - running, jumping, throwing etc. Third most medalled events are shooting and weightlifting, each a long way behind with 15.

It starts raining again but thankfully stops before I head home and I manage to get to the pool without getting wet. I do a quick 30 lengths then head home to take the two dogs out onto the park. The park has now started locking its gates at 8.30, which is a bit ridiculous for August.

I cook a curry and as it's the weekend (neither of us are in work on Thursday or Friday) we have a glass of wine with it.
Posted by FitForNothing at Wednesday, August 13, 2008