The 2012 Rowing Team Might Have To Do Without Me

L is pleased that, for once, the guy she brought home last night is still there with her in the morning and hasn't sneaked out of the house at some unearthly hour. Probably to a dog show.

So it's a nice relaxing Saturday lie-in, then I spoil it by taking the dogs out before heading off for another embarrassing afternoon at the football. Perhaps the team can't get into the football yet either, like me they're still engrossed in the Olympics. I can even get into our Fantasy League yet.

Where it matters, James DeGale wins our 19th gold in a bad-tempered middleweight Boxing final. 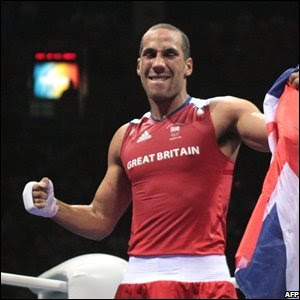 Equally bad-tempered is the taekwondo, where Britain's Sarah Stevenson loses her quarterfinal to China's Chen Zhong because the judges seemed reluctant to give her the points she was entitled to. They controversially missed a final-round kick to the head (it's a nice friendly sport) which would have been enough to win. 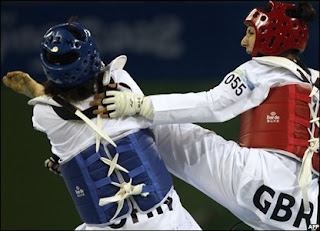 A successful appeal eventually got the verdict reversed. Stevenson fought on to clinch a bronze.

The biggest drama came when the Cuban, former Olympic Gold Medalist Angel Valodia Matos, was disqualified for taking longer than the allowed one minute to return to action after an injury. He shoved the referee and then kicked him in the head, drawing blood from the mouth. Nice. 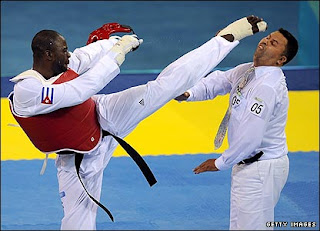 He then attacked the Swedish judge before spitting on the floor and being escorted out of the arena. Both Matos and his coach have been handed a lifetime ban.

A bit more friendly was the kayaking where Tim Brabants added to his medal collection by clinching bronze in the 500m event.

L bemoans the fact that she's not managed to do any fitness stuff in all day so, instead of our planned cinema trip, I treat my girl to a night out at the gym. We head over to the tennis centre which is the only leisure centre that is open late. Gyms aren't really my thing but I do like a quick 2000m on the rowing machine and that is what I have in mind but in the end opt to do 5km on the treadmill. Half way through the session, I hit on a brilliant but simple idea. I don't know how I haven't thought of it before. I set the treadmill to the pace that I need to improve my 10k time. I set it to 15kpm, which is 40 minute pace and it's frighteningly fast or so it seems. It's too fast for my water bottle which totters off the side of the treadmill where I've left it. It falls onto the belt and rockets between my legs, off the end and across the gym floor, splattering water as it goes. I ignore it; I'm certainly not stopping. Eventually some young girl, well L, is good enough to hand it back to me.

After my treadmill session, I'm in no fit state for 2000m on the rowing machine but I do manage half that, slowly. So the 2012 rowing team might have to do without me.

We head off for a pint or three. We start in the Johnsons Arms but Black Sheep is the best they have, so we pop our head in the Wheatsheaves where we never stay and we don't again. It has almost exactly the same beer range as the Johnsons. We head townwards and almost end up in Nottingham's own Taekwondo arena, known as the Market Square, but we stop just short at the Hand & Heart where I end up drinking Burton Bridge Mild, which, surprisingly, is very nice.
Posted by FitForNothing at Saturday, August 23, 2008