At Least It Doesn't Have A Pudding As A Memento

L was very assertive and entered the Edwinstone 10k months ago. I felt I couldn't let her compete alone, so I sent off an entry too. At least it doesn't have a pudding as a memento, like the race the other week and the one next week.

The main thing to say about this morning is that it's very cold. Even at 10.30am, the race start time, the ground is still icy.

We have a minor disaster before we even start. We have both dogs with us but not a lead between them. It's not like us to forget such vital kit. I use the belt from my jeans to lasso MD, whilst Doggo runs free. Then MD slips his collar and runs free too, only it's not quite so easy to get him back under control. Eventually job done and that's my warm-up accomplished into the bargain.

Due to the near Arctic weather, I opt to compete in long trousers and immediately feel a wimp for doing so. Naturally, many people are still kitted out as if it's mid-summer, if you're in Barbados. 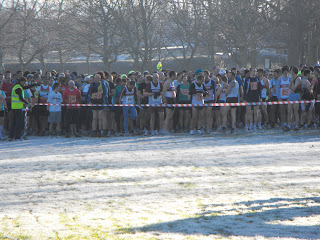 The race is described as a trail race but isn't quite as serious as that usually implies, the race is on trails through Sherwood Forest. They're actually quite easy to run on, the frozen ground helps, otherwise it may have been very soft underfoot.

A few kilometres in and it appears that the km markers are not correctly spaced because I start impressively fast, slow to almost a jog by the 2km mark and then accelerate back up to PB pace by the 4km mark, all without changing my stride....

By the time we get to 6km they seem to have settled down and I can see I'm heading for a 41 minute race, slow by road standards but I've no idea really what a good off road pace is for me.

I get in a good group with three other lads and we seem to work well together until a young lass comes and naturally, spoils it. She catches us up, runs with us for a while and then tries to push the pace. Naturally, we all try to go with her and are gradually burned off one by one. A sobering experience indeed and I wasn't last to go but nor was I first.

The first 2km were mostly downhill so I'm expecting an uphill stretch towards the end and I'm not disappointed. One of the other guys who got dropped catches me up just before the final climb and despite my best efforts sticks to me up the hill. I know he intends to go past me on the descent and if he wants it that bad he can have it, I'm in no mood for a sprint finish. 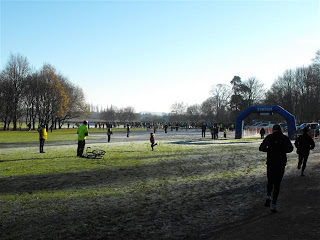 I'm not happy with my time, obviously, but position wise, it's much better than I expected and I come inside the top 30 out of over 330. L says she though I was taking it easy. Well I was, kind of. I can’t believe I did that well.

Then it's home for the customary hot bath and warm down. Later, rather than hit the pub we stay in and ward off the cold with an out-of-date, by two years, bottle of mulled wine, which is rather good. Well matured I suppose. Followed by some Leffe and French porter. As a real treat I cook up Corned Beef curry, a real credit crunch meal.
Posted by FitForNothing at Sunday, December 07, 2008