A Bit Of Bing

L and I get up early and with help/hindrance from the dogs, do Son's paper round, although I am not offered any Christmas tips by any of the customers, not even a mince pie. Job done its back to bed with a coffee, the Sunday papers and the papergirl herself. Now that's what I call service. Well worth a tip.

A few hours later, I'm on the park with the dogs again whilst L's out running, her second run in two days. Seriously putting me to shame.

Apparently, I always take L to see something mushy at Christmas. This year she seems to have got about three lined up for me. First, an old 'classic' in err... 'White Christmas', which they are showing at Broadway and oddly, it's packed. In front of us are a group of girls who have sneaked bottles of wine, real glassware (plastic only allowed!) and plenty of mince pies etc past the attendants.

Perhaps being drunk is the best tactic but the half a pint of 7% Brew Dog's 'Not Just For Christmas' isn't quite working as we settle down to a bit of Bing.

I can't really slate 'White Christmas' now can I, in fact if modern rom-com's were like this the world would probably be a better place but it's all just as implausible as the modern equivalent.

By 1954 when the film was made, the song 'White Christmas' was already a 'classic', so they made a film around it and Bing. Exactly the sort of thing they'd do these days.

Bob Wallace (Bing Crosby) is coerced into becoming a song-and-dance duo with Phil Davis (Danny Kaye) in repayment for Phil saving his life when they were in the army. They are successful as a duo and Phil tries to pair the workaholic Bob off with a fellow performer Betty (Rosemary Clooney) one of the Haynes sisters, so that he can get some time for his own philandering. Bing must have been 50 when he made this, whilst Clooney was in her mid-twenties. Nice work if you can get it. 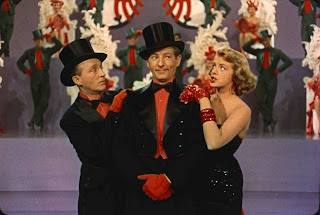 They follow Betty and her sister Judy (Vera-Ellen) to their next show in Vermont.
The inn in Vermont, is practically empty because despite it being December its 68 degrees fahrenheit and there's no snow. It turns out the inn is owned by their former army commander, General Waverly.

So they bring their show up to the inn, to try to drum up some business for him. Then it gets all rom-com, Betty thinks they are just doing it for some free publicity and goes AWOL, whilst Judy and Phil think that if they stage a phoney engagement it will encourage Betty to go for Bob. It doesn't. 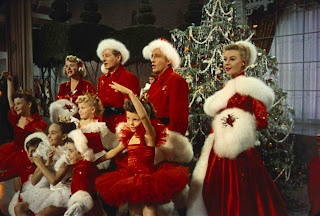 In the end Bob gets all the troops from his division to surprise the general on Christmas Eve, this is the best bit of the movie. Betty realises Bob is her 'knight on a white horse' after all and they all live happily every after.

A fun and enjoyable film, despite some awful songs. Such as the cringe worthy 'Snow' sung in the dining car of the train to Vermont and another called 'Count Your Blessings Instead of Sheep', which I shall teach to MD.

Back home, L does Wassail, which is hot beer with port and spices. A bit like mulled wine but with beer. Nice but heavy.
Posted by FitForNothing at Sunday, December 21, 2008