I take the bus and run in. The ground is a bit slippery in patches but not too bad really. My legs are tired though this morning, don't know why.

L's off work today and claims to have been out on a pleasant walk. Pleasant? I assume she must have left the dogs at home then.

Watch out for the new blockbuster called 'Nottingham', although it's now not due out until 2010. Ridley Scott is making it and the subject is something that really hasn't been done before... Robin Hood. Yawn. The star who's going to play the lead... Russell Crowe. Yawn.

Tonight is my company's Christmas meal, although I won't be there because tonight we have the (dubious) honour of accompanying L’s Dad to see his favourite band... cue fanfare... ta da... Status Quo! I hang my head in shame. Although L reckons I could still be at the meal for dessert because Status Quo and their fans are now getting on a bit and will all be tucked up in bed with a hot water bottle and cocoa by 9pm. To be honest though, I don't really enjoy the Christmas meals and actually, whisper it quietly, I'm quite looking forward to the Quo, in a sadistic sort of way.

L can't decide what to wear. I would have thought that was obvious. White t-shirt, ripped jeans and a leather jacket naturally.

When we get there, I'm a little surprised at the size of the crowd. I thought Quo were perhaps the biggest thing to hit the Arena since the Dalai Lama sold out five nights there in May... but I reckon there was only about 2500-3000 there, whereas a full arena is around 8000. The whole thing could have probably been staged at the Concert Hall, which would have been more appropriate because the average age of a Quo fans seems to be about 55 and a lot of them struggled to climb the steep steps of the Arena seating.

Now I've mentioned the venue, let's get the Arena bashing out of the way. I don't know whose job it is to set the place up for bands but they're not very good at it. Tonight's setup was rubbish. The crowd were shoehorned into one-half of the stadium and the band were shoved down the other end. They had brought the stage forward a bit but not much. We were a lot further away from the band than was necessary, the stage could have been moved a lot nearer.

It was also all-seater, which would have been ok if people had wanted to sit but everyone down on the floor area clearly wanted to stand and dance. They didn't even put many seats down there; there were big areas of unused floor.

The arena staff got seriously caught out because loads of people went to the front to stand straight after the support finished and they weren't ready for them. Eventually they got themselves organised and prevented anyone else going down there but why, when at a normal gig they allow more people than that to stand.

Support was by Manfred Mann's Earth Band with Mr Mann himself on keyboards. Well I'm afraid I just found them desperately boring. I'm not terribly up on much of their material but obviously, I knew 'Blinded By the Light' which was ok and the 'Mighty Quinn' which they finished with and murdered. It was all very 70's and as is the tradition of that period the band were determined never to let a good tune get in the way of an overlong guitar solo. 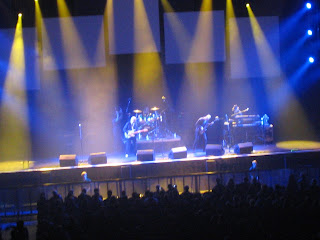 One thing I have to say about the Arena tonight is that the sound was good. I think I've finally worked out how they sound check the gigs, it's all set up for the chap in Block 10 Row N Seat 20, that's me by the way. So excellent sound, just a shame I'm straining my ageing eyesight to see the band.

So to the mighty Quo. Rumours that they are being kept alive on life support are premature. As for their audience well, even they seem to have some life left in them and are soon air guitar-ing in the aisles and for the less mobile, tapping their walking sticks, as the band open with 'Caroline'. Rumour also had it that they're accepting bus passes as valid ID at the bar, where they're also selling cocoa and biscuits, alongside the sherry.

Quo are much maligned as just a three chord band, as characterised by themselves in last year's 'In Search Of The Fourth Chord' album from which the single 'Beginning Of The End' is given an airing. I can honestly say that there's more to them than the head down rock everyone knows. E.g. 'The Wanderer', 'Roll Over Lay Down', 'Down Down' etc etc, which are all present and correct tonight, at times accompanied by the sight of all four guitarists side by side, strumming away in the familiar Quo pose.

In fact, I'm actually impressed and surprised by their diversity. From the psychedelic sound of 'Pictures Of Matchstick Men' from 1968 from which this 'Pictures' tour, to celebrate 40 years of the Quo, takes it's name, to some more recent stuff, a couple of tracks 'The Oriental', which is a bit dubious, and 'Creeping Up On You', which isn't half bad, from 2002's 'Heavy Traffic' album.

There are also plenty of oldies, that is in the set list, as well as in the crowd, some which I certainly don't remember, but I was still in nappies when some of them came out. All the way through clips of videos and old footage appropriate to each song is displayed on the screens behind them. 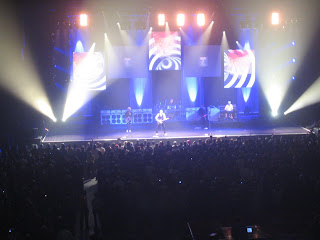 For me the highlights tend to be when Rick Parfitt is at the mic, such as for the excellent 'Rain', for me he upstaged Francis Rossi every time he took the lead. Parfitt's singing was outstanding, particularly considering he had growths removed from his throat only two years ago.

There are a few irritations, like when they disappear off into a medley. I hate medleys. If you're going to play a song, play it in full or don't bother. If you want to fit in more songs then cut out irritation number two, the pointless drum solo. 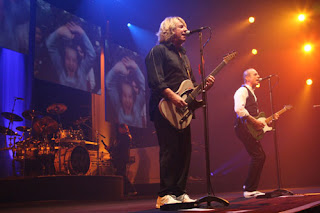 They close pretty much as expected with a string of their hits from the 70's, culminating with 'Whatever You Want' and of course 'Rocking All Over The World'.

The encore is a bit odd. 'Burning Bridges' is rocky but not the best, a brief bit of 'Rock n Roll Music' and then finally 'Bye Bye Johnny'. Then the band troop off stage as the new Christmas single is played through the sound system and on the video screen. This falls totally flat and is cut off half way through to the accompaniment of boos from the disappointed crowd.

Quite why they couldn't bring themselves to perform, and therefore promote, their first ever Christmas single I suppose only they know. It was all a bit of a damp squid ending to what otherwise was a pretty impressive and dare I say, credible, performance.

I suppose now that I've been to seen the Quo, it must officially be Christmas.
Posted by FitForNothing at Friday, December 19, 2008