Every Cloud Has A Silver Lining

It's positively sub-zero this morning but none the less, I brave it and go into work on the bike. As expected the main roads were well salted and fine. Fine that is unless you want your gears full of salt; I make a mental note to do a full clean of the bike this week. The side roads though were a bit treacherous and I regretted taking one of my usual short cuts because it's got a bit of a steep downhill in it. They also don’t seem to do as much salting in Derby as they do in Nottingham, which I usually think is a good thing.... The road was so bad that I went onto the pavement because I though it looked better but oops, bad idea. My front wheel just disappeared. I’m going to have a nice bruise on my hip, so no moshing at the gig tonight.

I email L and tell her of my mishap and she promises to check out my bruising tonight. Every cloud has a silver lining as they say. As my Grandma would always say, it needs kissing better. She was a bit of a dark horse was my Grandma.

I vow to be more careful on the way home and that's not just my bruise talking.

Tonight we are at Rock City. The support band are four lads from Toronto known as the The Mark Inside. They make you 'stand up' and take notice because they play loud, some times heavy and the lead singer likes to shred his vocal chords Frank Black style. Underneath all their noise and energy are plenty of decent guitar riffs fighting to get out. I understand the band have been together for some time and released their debut back in 2005, their next record is available in the spring, it could be worth checking out.

The Hold Steady had to postpone their October UK tour due to guitarist Tad Kubler's illness. He's now recovered and tonight it's the third night of the rescheduled tour.

They begin with 'Constructive Summer', also the opening track of their latest album 'Stay Positive'. Summer? How quaint on such a cold Tuesday night in December but those of us who brave the elements are treated to an impressive set culled from their four albums. I checked out the set list from the previous nights to try to gauge what they might play but it seems they rip it up and changed around half the songs each night. So certainly, a band you could go to see every night without getting remotely bored. 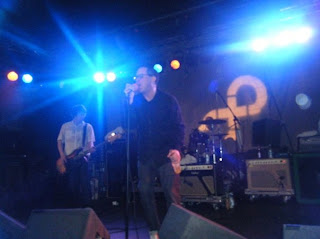 Craig Finn, a most unlikely looking rock star if ever there was one, is bouncing around the stage from the first note. He's obviously intent on having a good and I'm sure he hopes the crowd do too but I don't reckon it would spoil his enjoyment if they didn't.

'Massive Nights' from the brilliant 'Girls And Boys In America' album rings out and the crowd gradually thaw out, well, it is cold. Rock City is probably only about half full tonight, which is a shame because the Hold Steady are pure entertainment and certainly under appreciated. 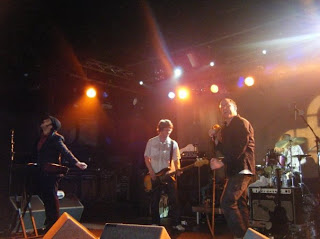 By the time 'The Swish' and 'Magazines' had been despatched the crowd were much more up for it. Particularly down the front, where they were singing Finn's lyrics back at him and attempting to get away with crowd surfing. When the band rock out like this they're really good but Finn is a storyteller at heart and tonight they leave out some of their rockier numbers which causes the set to get a little bogged down in the middle. There are a few too many Jackanory moments.

Not that this bothered the thirty or so anoraks (and I mean that in a nice way) down the front who knew all the words to all the songs, including some pretty obscure oldies. Finn, I think, was impressed, as well as delighted. Although occasionally he seems to forget the rest of us, singing some of his vocals off mike and straight at his select group down the front.

Kubler digs out a huge twin-necked twelve-string guitar for another slow one 'Lord I'm Discouraged' but then the set picks up pace again towards the end and it's a storming finish, 'Your Little Hoodrat Friend', 'Sequestered In Memphis', 'Chips Ahoy' and 'Slapped Actress' to finish. 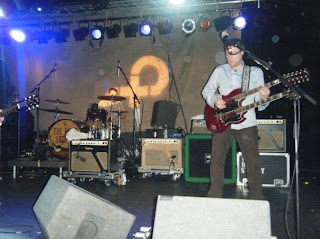 Finn lost faith with music back when he was at his supposed peak but later rediscovered it, realising it was all just meant to be fun and formed the Hold Steady. This aspect comes across in bucket loads in the band performance, they are a band who clearly love what they do.

They return to play another jewel from 'Girls And Boys In America' with 'Stuck Between Stations' before 'Navy Sheets' and the 'First Night' closes the show.

Finn says he's not living the life he thought he would at his age, he's almost as much of an oldie as me, although he's not yet gone over 'that hill'. For that, he says, he is thankful. Something for us all to aspire to.
Posted by FitForNothing at Tuesday, December 09, 2008