Somewhat Of A Relief

Daughter's off out this morning to a Kabbalat Torah service, I would elaborate if I could, and L is up and away to help her with her mammoth paper round, before I nor the dogs realise what’s happening.

We console ourselves with an amble on the park before heading off to part with loads of money food shopping and placing a Christmas order at our local farm shop.

Then misery as Derby lose yet again in the league. So it looks like we're concentrating on our fluky cup run instead. They made the draw this morning for the semis and I expected to get teed up for annihilation again by Burnley, they stuffed us a fortnight ago. So perhaps it's somewhat of a relief to get Manchester United... or perhaps not.

Tonight Clint Eastwood's 'Changeling', which is a true story that explores the dark side of 1920s Los Angeles.

Christine Collins (Angelina Jolie) is a single parent who works as a roller-skating supervisor for Pacific Telephone in what looks like the equivalent of a modern day 'call centre'. One weekend she is asked to work a Saturday shift and has to leave her young son Walter home alone. When she returns after work, she is greeted by an empty house. Walter is missing and when she contacts the police, they are extremely unhelpful.

She hears nothing for months but then, when all hope seemed lost, the police produce a child whom they claim is Walter but from the moment he steps off the train, Christine insists that he is most definitely not. The LAPD, who are portrayed throughout as being a corrupt gang of thugs who answer to no one, are desperate for some good publicity to restore their tarnished name. Their thinking is that returning a missing kid to his hard working, single mother would do the trick, no matter if it's the wrong child. 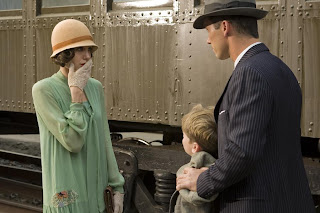 So, they tell her to smile for the press and take him home, telling her she's in shock and anyway young children can change so quickly. They dismiss the ton of evidence supporting her claim. Saying it would not be usual for a child to shrink three inches, acquire a completely different set of teeth to those in his dental records, forget his teacher and all classmates and even get himself circumcised in the months he was missing. Although didn't she have an old photograph of her son that could have helped clear all this up? 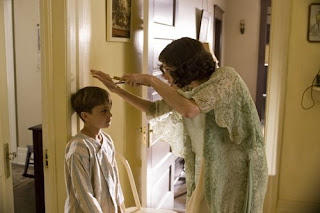 Christine continues to challenge the force and their particularly obnoxious chief J. J. Jones (Jeffrey Donovan), who is corruption personified. She is determined to uncover the truth and find her real son but the police continually deny any wrongdoing and try to discredit her as an unfit mother.

The only person willing to believe and help her is the Reverend Briegleb (John Malkovich), a man trying to expose the LAPD on his radio show. 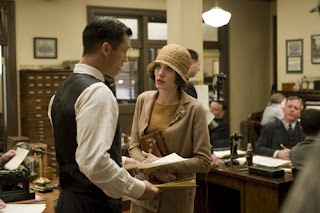 When she tells all to the press, Jones invokes ‘Code 12’, a rule under which citizens can be committed to a mental asylum without a warrant. Scary. She is told she will stay there until she agrees to tow the line. The mental institution, like a lot of the film, does not make easy viewing.

Meanwhile, at a ranch outside the city, a good cop, Detective Ybarra (Michael Kelly) find a young Canadian boy who has chilling story to tell and so unfolds the tale of the Wineville Chicken Murders. The police trace and convict the perpetrator; serial kidnapper and killer, Gordon Northcott played to perfection by Jason Butler Harner. Slowly the details emerge of the grisly murders almost in the style of a horror movie as Detective Ybarra uncovers what really happened to Walter and many other boys. 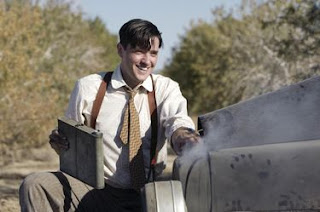 The uncovering of the murders, helps Briegleb and a lawyer, who is working for free, to get Christine out of the asylum but unfortunately as a survivor of the abductions turns up and tells his story; there is no happy conclusion.

Overall, a good film, disturbing in some scenes and sometimes difficult to sit through, but still impressive. Jolie, who isn't really used to roles that test her, is convincing without being outstanding.

It's certainly not for the casual viewer who's after a bit of the usual Hollywood escapism but in my opinion, all the better for that. Just don't expect to leave the cinema with a smile on your face.
Posted by FitForNothing at Saturday, December 06, 2008