After taking part in the Aston Christmas Walk we head over to my brother's to exchange presents. Then its home to be reunited with the kids and to cook our leg of lamb for L's parents who are coming over this evening.

In the afternoon, I watch 'Hancock' with Daughter. The idea of the film is quite ingenious because Hancock (Will Smith) is a drunken bum of a superhero who causes more damage than he prevents and consequently he is roundly hated by the general public.

The film started off very promisingly but as soon as Hancock started to get a PR make over, by Jason Bateman, whose life Hancock saved, it started to lose track of the original great idea. I thought it was going to pick up again and possibly get quite edgy when Charlize Theron looked as though she was going to try to bed a superhero but it turns out she's a superhero too. Doh, don't you just hate it when that happens. 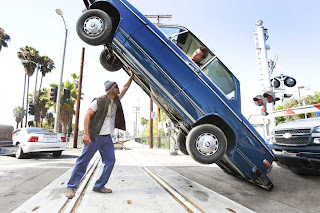 Generally a fun film but not the best use of a great idea. This is rare case that when the remake is made, a few years from now, it's going to be a better film.

L's parents arrive and L's kitted out in those black stockings again, you can't beat the Christmas traditions.

There's been idle threats flying around for the last month or so of who's buying who the Mamma Mia DVD for Christmas and so everyone been on edge as a result. In the end, L is the only one who ends up with it. She seems thrilled, mainly because she can now try to inflict it on me. So far, I've been very proud to be one of that select group of people who haven’t seen it.

The lamb is excellent and there's not much left for the dogs but that's mainly because we let the other animals in the house, Son and Daughter, get their hands on the lamb bone first.
Posted by FitForNothing at Saturday, December 27, 2008