Trying To Look Fit And Professional

No walk today because the planned entertainment is worse, it's called the Langdale 10k. It doesn't start until noon, so it's a leisurely start. Time to sleep off last night's four pints and a mulled wine but surprisingly the old head is clear.

The start is on the road, which is very narrow, so it's essential to try and get near the front or else I'll get bunched in. I try and find someone fast to stand behind, they all look fast, so I settle for the one with the ponytail... Then we're off and that's the last I see of her.

The cottage we're staying in is at both the 3km and 7km points, so I have to try to look fit and professional twice, which could be tricky but I think I pull it off.

When I pass our supporters at the cottage for the second time, I'm just behind a chap who's running in long trousers and the need to put on a good show encourages me to sprint up the hill past our cottage. I go past the guy there and he never gets back on terms with me. So having a fan club there certainly helped.

I had predicted to our friends that I would do between 41:30 and 42:00. I wasn't expecting a good time, what with my bruised hip from the cycling incident and the beer last night. So, it's somewhat of a surprise to be approaching the line and looking set to break 41:00. I contemplate jogging on the spot to kill time but with quite a crowd gathered outside the Stickle Barn this could make me look rather stupid, particularly if someone dressed as Santa jogged past me. So instead, I finish in 40:45. Not bad at all in the circumstances. I am then handed a cheap Tesco's Christmas pud which is a bit disappointing when the shop down the road are selling Lakeland ones. I'd pay extra on the entry fee for one of those.

I jog off to get the dogs and we all cheer L across the line before we nip into the pub to celebrate with half a pint of Old Peculiar each. We may have missed out on it last night but they still sell it at this pub.

Then we head home to a well-earned late breakfast, it's now 2pm.

That about wraps up the weekend away and we head home, dodging the M6 because it was allegedly at a standstill, and then later, dodging the M1 for the same reason.

We arrive home to discover that Britain's Olympic cycling team have continued their domination over... well everybody, by taking a clean sweep of the BBC Sports 'Personality' awards:- Team of the Year, Coach of the Year (Dave Brailsford) and well done Chris Hoy, who won the main award. 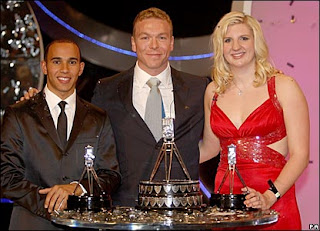 L was convinced that 'that Adlington woman' would win it. She’s certainly been putting in the PR effort; she’s been popping up absolutely everywhere. Jo Jackson, who got the bronze medal, has been sadly forgotten about but she's probably been slogging it in the pool ever since and will win everything next time around because Ms Adlington is so unfit.
Posted by FitForNothing at Sunday, December 14, 2008