It's non-uniform day at work, where we are only open for the morning. We expect to be released at noon but they keep us in like naughty schoolboys until 12.30. At which point I get the bus to Beeston rather than home, where I meet L and the dogs for a late liquid lunch. L doesn't look too frazzled when she arrives having walked the two dogs across, I had been concerned that doing so might have an adverse effect on her alcohol consumption.

After sampling a few, fairly unspectacular Christmas ales, we wobble back home to get started on the cooking. I have my stuffing, pigs in blankets and the celebrated eggnog to make.

I still haven't managed to see any of the hoax signs that have supposedly been put up around Nottingham, telling people that it is legal to 'relieve' themselves in certain public places. 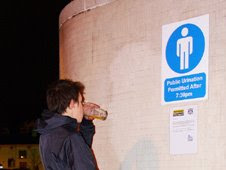 The official looking laminated signs which read "Public Urination Permitted After 7.30pm. In an attempt to reduce late night public nuisance, during the holiday period, Nottingham City Council has designated several public urination areas across the city. This urination area will be cleaned daily between the hours of 5am and 6am."

Nottingham City Council are now setting about removing them.

The advantage of having a blog (I knew there must be some advantage somewhere) is that you can look back and see what you did in the past. Apparently the last time we had the kids on Christmas Eve, we stayed in and got all romantic in the bedroom, without the kids, but with three bottles of Pelforth and John Malkovich as we watched 'Dangerous Liaisons'. If we're going to repeat the trick this year, all we've got in 'Lust Caution'...

As it happens we're knackered and slightly inebriated after lunchtime so it doesn't come to fruition, we also didn't have a disruptive puppy back then. It was also by no means certain we'd have him this Christmas Eve either, that is if Daughter had carried through any of her threats.
Posted by FitForNothing at Wednesday, December 24, 2008