It was an interesting ride in. It wasn’t snowing when I left but then suddenly I was caught in blizzard, it soon passed though and the roads weren’t too bad, mainly wet. I only had one iffy moment when I discovered how slippery it was in the gutter where a car tried to shunt me into the kerb.

MD is still shattered but it's his own fault. He was too busy keeping me awake last night when he should have been sleeping. He so nearly shot his bolt and ended up back on his own, in the cold kitchen. He has been warned. He's also bringing the worst out in Doggo, who because he won't share his preferred spots has taken to digging the carpet instead. Presumably trying to make a new comfy spot.

L informs me that she owes our joint account £10, because she's been out buying woolly tights. I think we can afford that and it sounds like money well spent to me. Particularly if she's wearing them tonight. She'll need then, it's that cold even Daughter went to school in a coat. In fact L's probably wearing them now, under her work trousers.

Best laid plans and all that. L was going to head home to cook whilst I took the boys for a splash around the pond before we went out but L got stuck at work and I have a dog that doesn't what to be exercised.

MD is just too tired to run, so we end up aborting after one street and instead just walking down the verges, so Doggo can do his sniffing, scratching and the like. We get to the end of the verges and turn back, well two of us do. Doggo stands there incredulously, knowing full well that the routine is we go from here to the pond, around it and then back. Not tonight mate sorry, blame MD.

Back home, I leave the kids in junk food hell, which they'll love obviously and head down to meet L. Who's not wearing her new purchase because she's been unable to get home to put together something to go with them. Damn. We walk down, whisper it quietly, to the Arena.

I would like to offer some quip that the M83 runs from Kilmarnock to East Kilbride (or some other equally obscure locations) but it does not. I would also like to say what an uninteresting straight road with little distractions it is, but I'm not even sure there is an M83 motorway at all. There is however, a band, who could be very like that fictional road.

They take the stage just as we arrive at Nottingham's Ice Arena, the place feeling every bit like an ice rink tonight. It's around zero outside and probably colder inside. Anthony Gonzalez seems to agree; he keeps his scarf and coat on for a least the first half of M83's 45 minutes set. They make a promising start with a powerful opening with a lively instrumental track but there after it all sounds a bit samey. M83 are a French electronica band who were once a duo but now consist of just Gonzalez together with session musicians. Tonight there's a guitarist, a drummer, Gonzalez on keyboards and also the keyboards of his female companion, with whom he shares vocal duty. He keeps her in her place, sideways to us, so that we can't even see her face. He describes his music as something from the shoegazing genre but I don't see that, shoegazing was all guitar. Anyhow, his music is more 80's than 90's, I think secretly he wants to be Jean Michel Jarre.

Despite the obvious musical talent up on stage, for the uninitiated, which must be at least 99% of the audience tonight, it's easy to get lost, overpowered and with many songs blurring into one another, well bored really. Sorry.

It appears that the bigger a band gets the more roadies they acquire. Kings Of Leon have so many, that they don't know what to do with themselves. I mean the bands equipment still consists of just three guitars and a drum kit. How hard can it be to set that lot up? Thankfully there's all the lights to fiddle with and luckily one bank of lighting isn't working, so they can all cluster around that and give it a good prod.

The Followill boys take the stage to the sound of Mozart’s Requiem (apparently, I'm no expert), until this is replaced by the haunting guitar sound that is the opening of 'Closer', which echoes out across the arena. Game on. A good entrance and they follow the sequence of their latest album, 'Only By the Night', with the heavy bass of 'Crawl'.

The Kings blasted through four or five songs before anything is said to the crowd. Nothing unusual there, the band never have been much for that sort of thing. When they're up there on stage they spend their time playing music. Nothing wrong there, playing music is what they do best.

That said, Caleb, a man of few words, was positively chatty tonight... 'Hi, we are Kings of Leon'. I look around but I can't see anyone cursing, 'Damn, get your coat love, we're a week early for the Stereophonics'. Caleb mate, that's why we're here. 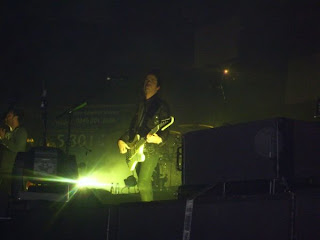 The three brothers and their first cousin from Tennessee are on fine form tonight, despite the rumours that they're not speaking to each other. Families eh! Named 'Kings Of Leon' because their father and grandfather are both called Leon. Bless. How nice to have dynamic offspring.

It's a pretty good crowd tonight, involved but not too raucous. The beer throwing that often blights the Arena is happily absent tonight.

Caleb urges the crowd to sing along as the intro to their number one single, the wonderfully seductive 'Sex on Fire' rings out. It's interesting to watch his facial expressions; we're close enough to the front to do so, as he sings some of his more dubious lines. I notice his eyebrows go up on each double entendre. 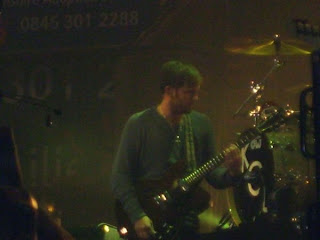 The light show is impressive, although fairly incidental and I assume is to keep those at the back of the hall, who can't see the band, amused.

He announces they are going to perform 'a few songs we haven't played in a long time' and introduces an oldie, delighting and confusing the crowd in equal measure as he throws in 'Joe's Head' from their debut album.

As ever the Arena made it sound like they were playing into a bucket at times. If only they'd put a proper ceiling on it, then we'd have something called acoustics. Whilst their newer stuff is undoubtedly designed such cavernous arenas and festivals, some of the older stuff sounds a bit thin. 'Molly's Chambers' for instance sounds a little bit tamer each time I hear it.

There were plenty of highlights though as the band rummaged into the recesses of all four of their albums. 'Cold Desert' is suitably poignant and 'On Call' suitably brooding. 'The Bucket' goes un-dedicated to the Arena sound system while 'Milk' is just plain terrific and also quite a sing-along, as is current single 'Use Somebody'. This had the audience waving their mobile phones in the air like cigarette lighters. Oh for an air rifle.

Caleb gave everything into every single note of every single song, whilst the rest of the band simply get on with their jobs and did them well.

Caleb's back chatting, being almost humble or well oiled, and repeatedly thanking the crowd for making them bigger than they ever thought they would be. He did seem to genuinely mean it and appeared truly grateful to be up there in front of everyone. Also apologising for playing such a mammoth set. The Kings are certainly value for money tonight. 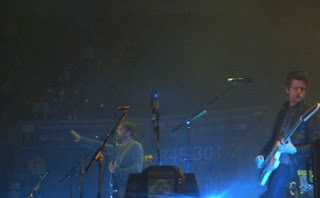 There's a hint of tension when Jared seems to lay down his bass after 'Slow Night, So Long' or perhaps he's just knackered, this was song number 22 but Caleb talks him into one more. Confounding/delighting (delete as applicable) everyone again by closing with the wonderful 'Trani'. After which Jared seemed to storm off stage whilst the rest of the band milked the applause.

There were no less than five tracks from 'Youth & Young Manhood' tonight, other bands please take note, sending me home a very happy bunny by playing both 'Wasted Time' and 'California Waiting'.

After the marathon main set, the band come back for an encore and a long one naturally. Well it's going to be when it opens with the epic seven minutes that is 'Knocked Up'. As 'Manhattan' is played, I can see several people in the seats, itching towards the exits, desperate to be first out of the car park but not wanting to miss anything. Caleb won't be rushed and screams out 'Charmer'. Pure quality. Time for one more? No one got any kids or collies to get back to then? No? Good. Here's 'Black Thumbnail'. After which the three other band members grab Caleb by the hair and drag him screaming from the stage... no not really. 'We are King Of Leon. Goodnight'. Excellent.

Hang on, Caleb, come back a sec, L wants 'Notion'. Someone’s always going to leave without hearing their favourite song and tonight it's L, but with their long set they made a good attempt at minimising that. Ok if I'm being picky where was 'Red Morning Light' and for that matter, 'Taper Jean Girl'. So that's 30 songs next time, if that's ok with you boys.

They played for a total of two hours. Can a band play too long? Possibly and I'm certainly a fan of short and punchy but I can't really find fault tonight. Although... and I know I say this every time I'm arena-ised but I'll say it again. How good would they have been in more intimate surroundings? Where Caleb could have screeched to his hearts content without all that effort disappearing up the air conditioning. It'll never happen now of course, now that they have their fame and can pull crowds as big as this but wouldn't it nice.

It's all enough to make you almost forget that there's an important cup quarter-final gong on tonight, Stoke v Derby and with an hour gone I notice its still 0-0. So we're doing better than I expected but then I can't get an internet connection in the Arena to find out any more.

I get home to find out that we've won 1-0 with 94th minute penalty. Former Derby player Andy Griffin, who did very little for us whilst he was at the club, pays us back in spades with a timely handball. Cheers mate.

All photos thanks to Jade Skellington
Posted by FitForNothing at Tuesday, December 02, 2008