The weather hasn't been kind this week but so far I've successfully dodged the worst of it, although there's no escaping the wind today. It's blowing a serious gale out there.

Now this is really frightening, Rick Astley has been nominated for 'best act ever' at this year's MTV Europe Music Awards. Is this a joke? Rick Astley was the pinnacle of musical achievement? Perhaps not, because the rest of the nominees are equally frightening. Rick is up against U2, Britney Spears, Christina Aguilera, Green Day and Tokio Hotel. U2 fair enough, Green Day maybe, the rest... someone's having a laugh. Tokio Hotel by the way are an obscure German band who seem to win awards, have number one's in Austria but not much else. 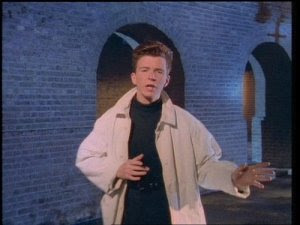 The pool is almost empty again tonight. Where are the students? Where's my good friend the student in the cardigan that doubles as a towel? or is it a towel that doubles as a cardigan because I'm sure I've seen him wearing it in reception. Where's the lad who turns up every week just for a shower and never gets in the pool? It’s not the same without these characters. Mind you, an empty pool is nice.

I spend part of the time watching a couple of Trent students doing flip turns. As I duck under water to get a better view of their technique, I must look like a right pervert but it was my new years resolution to learn how to do them and time is running out, as we're now in October.

I get home to find both dogs running around the garden like spring chickens. They'll be nothing left in Doggo for dog class. As we get ready to go, MD looks so settled and contented that I leave him at home. As it happens he's pulling a fast one and I soon get a text from L to say that he's back to being a pain and she's out pounding the streets with him.
Posted by FitForNothing at Wednesday, October 01, 2008