I run into work, it's good but of course, the weather had to rain on me. It just couldn't help itself. There was absolutely no need but it must have thought, just a quick five minute burst to wind him up.

A couple of friends of ours have invited us to their house warming in their new house. Not that they've moved it yet because it's this one, 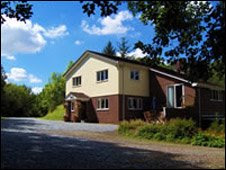 The one in Devon where the owners are raffling their estate. They've had to postpone the prize draw after intervention by the Gambling Commission. So, that appears to have stuffed the house warming party.

In the evening, we go to a meeting about Daughter's school ski trip, which turns out to be complete waste of time. Lots of filling of forms that could have been sent home and returned via the normal channels. There are absolutely no details divulged about the trip. We're still in the dark as to what day they're even going on. I realise later that the form filling was just a ruse to get everyone there so that a ski gear supplier could mount a sales pitch on seventy odd gullible first time skiers.

Back home, I'm warned that kissing is banned. L suspects she has a cold coming on and she wants me to be in tip-top condition for Sunday. This is the downside of doing silly events. I try to see if a couple of glasses of red will soften her up.
Posted by FitForNothing at Thursday, October 16, 2008