How To Pay For Plastic Surgery

A lie in, a trip to the farm shop and then I take the boys on the park.

In the afternoon, Derby win again. Up to 9th now and starting to look like Billy Davies's promotion side. Yes, it was that bad. I hope history isn't repeating itself. I've seen too much football to say winning is everything; I'd like some performances please.

Later, we're at Broadway to catch the new Coen Brother's film 'Burn After Reading'. I shouldn't really be on the beer because of tomorrow's event and helpfully they seem to have a cellar problem, so there's no draught but I'm still tempted into a bottle of wheat beer, which is naughty.

The story to 'Burn After Reading' involves a CIA analyst called Osbourne Cox (John Malkovich) who quits his job before he is pushed because of his 'drinking problem'. Thinking his role in intelligence was more important than it actually was, he starts to write his memoirs.

When a CD with it on ends up at Hardbodies gym, he finds himself being blackmailed by two of the gym's employees who believe it to contain sensitive CIA shit, as Brad Pitt puts it. Pitt plays a clueless workout freak called Chad who is egged on by Linda (Frances McDormand). Linda is a wannabe gym bunny, that is once she can get the cash together for the plastic surgery. 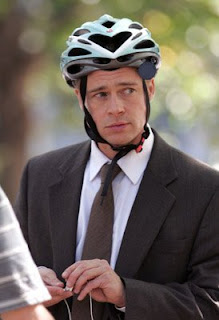 When Cox laughs off their bribery attempts, they take the CD to the equally disinterested Russian embassy. The film's a kind of espionage thriller without the espionage, instead the film moves around from one eccentric situation to another in a random manner, as the various story lines are intertwined. As usual, with a Coen's film, you don't get from A to B without going via X, Y and Z.

Brad breaks into Cox's house to try to get more of the 'CIA shit', only Osbourne isn't there but Harry is. George Clooney is Harry, in a role, which seems to send up his own image, a man who just can't stop hopping into bed with different women. For reasons known only to him, he's getting extramarital with Cox's icy wife Katie (Tilda Swinton), a woman with about as much sexual charm as a crocodile. I find Swinton unnerving in this role but then I'm still thinking of her as a boy in Orlando.

When Harry comes across Chad hiding in the wardrobe, he somehow, accidentally, shoots him dead. Harry is already paranoid because someone has been tracking him, he doesn't know it yet but it's a private detective hired by his wife, who, of course, is also cheating on him. Thinking Chad is a spy, he dumps the body in the river.

Harry, traumatised by this and presumably from having to sleep with the reptilian Katie, seeks a bit of light relief and solace in a new bed partner via internet dating. The lucky female turns out to be Linda. 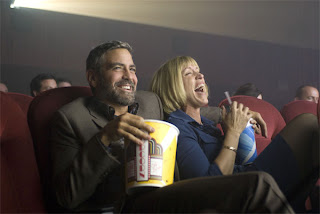 In his spare time between his affairs and a spot of jogging, we see Harry constructing something, which is supposed to be a present for his wife. It turns out to be a mechanical sybian machine. Linda seems very impressed.

Osbourne meanwhile, has to break into his own house with a hatchet because the reptile has started divorce proceedings and has changed the locks. There he comes across someone at his computer. It's Ted (Richard Jenkins), a former Greek Orthodox priest, now boss of Hardbodies, who because he gets a bit of a drool on whenever Linda is around, not that she notices, has decided to help out with the 'CIA shit'. Osbourne's had enough; he shoots Ted and then finishes the job off with the hatchet in the street. So as you can see it's a comedy... well only just and a dark one at that. 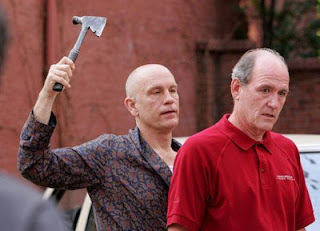 Where does all this go? Well, it doesn't go anywhere but brilliantly so. It's a clever film about 'intelligence' colliding with people with no intelligence.

It all finishes a bit suddenly, very Coen like, but unlike a normal Coen's film, we do at least get closure. The loose ends are tidied up and summarised in the offices of CIA, as they try to make sense of the nonsense that has happened.

Two dead bodies and Osbourne himself in a coma after being shot by the real CIA. Harry has been seized trying to board a flight to Venezuela, he fled in terror from Linda when she revealed she was working with Chad, the body in his wardrobe. The CIA understandably very keen for him to catch that flight. Linda, of course, will forget about the whole thing, if they pay for her plastic surgery. Result.

I was a little disappointed at first because the Coen's make some great 'serious' films but their less serious ones have been a bit of a mixed bag and this certainly fits into that category. For anyone else though, this would have been an excellent film.

I reckon they knocked this script up in their lunch hour, had they had a few beers and took the writing on into the evening they could possibly have written the best film of the year but then perhaps they didn't want to knock 'No Country' off the top spot.

It's been criticised for having a lame plot but I think that's the whole point. Perhaps that was the challenge they set themselves. Just how good can we make a movie that doesn't actually go anywhere? Bet they're having a right laugh at the reviews.

Whilst the rest of the movie industry are rehashing the same old stuff or doing pointless remakes and sequels, the Coen's are still coming up with something different. How could anyone object to that?
Posted by FitForNothing at Saturday, October 18, 2008