I cycle in today, leaving L in charge of tucking our poor tired pup up in his bed. On this front, L informs me she's failed because he was hanging onto her trainer as she attempted to leave. That's so sweet, that he couldn’t bear to be parted from her.

L emails me a CV. Do I know this fifteen-year-old girl? She sounds alright. Can we swap one of ours for her? Oh, hang on; it's Daughter's CV.

I get home and as time is pushed, I resurrect the Tuesday night run, which Doggo used to dread. Doggo is so surprised to see me blowing the dust off his running jacket; that he forgets to hide. MD is already by the gate, itching to go and go he certainly does. Like a rocket. He absolutely loves it. We do a forty-minute circuit around the park, stopping occasionally to let MD breathe. By the time we leave the park, it's almost dark and Doggo has to go on ahead clearing the deer out of our way. Which, strangely, he's keen to do.

Once home, for the second night in a row, MD is a heaving wreck on the kitchen floor. L has done a quick chilli, which we devour before we get ready for tonight's gig.

Then we discover a slight problem with the tickets. In that, we only have two of them. Daughter unselfishly stands down and tells L to go but then L feels guilty and tries to persuade Daughter to go. So we get the situation were they're arguing among themselves about who ISN'T going to go with me. I feel like Billy No Mates again. I'm not allowed not to go, as this is after all my delayed birthday treat. In the end L and I go.

Support is by Ida Maria from Norway. L is pleased because we saw her on Jools earlier in the year and she's been on L's 'must buy' list ever since. I liked her at first but she’s started to do my head in. On one of her tracks 'Queen Of The World', she sounds like Bjork crossed with Kate Nash. That's all we need, a Norwegian trying to sound common. That said she pours everything into her show, giving an energetic performance, all the time with her top hat, complete with feather, perched on her head. The crowd gradually warm to her especially on her set closer and most renowned track 'Better When You're Naked'. 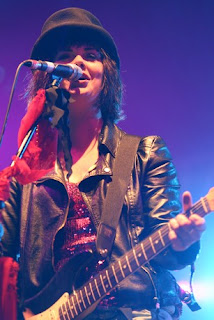 A word for her guitarist, who looks so like Aaron Gilbert from the Delays. L was positively drooling.

It's third time lucky in my attempts to cavort with the Courteeners. For various reasons, I missed them at the Rescue Rooms in January and then again at Trent Poly in April.

The band are from Manchester and are obviously very proud of their roots as the mix tape of solely Manchester bands hints at before they come on. Then the lights go out, the volume goes up and the speakers play Oasis's 'Rock N Roll Star'. No egos here then.

It's also not just a few bars, not just the chorus, nope, it's the whole song and after which... still nothing happens on stage.

Then after an indeterminate delay, they swagger on stage and play 'Aftershow' and 'Kokaine Kimberley' back to back. If the place isn't already going mental, it is by the time 'Acrylic' turns up as track number four. I'd like to quote Mr Fray himself and say that Rock City is full of over-rated dehydrated, goggle eyed girls, but it's actually mainly lads and a lot of them not much younger than me.

Ah, the cocky Mr Liam Fray, who is clearly the star of the Courteeners. Possibly the only star, the rest of the band hardly get a look in. It appears no one else is even allowed to offer up backing vocals. In fact, we're half way through their action packed set before he seems to even acknowledge their presence. 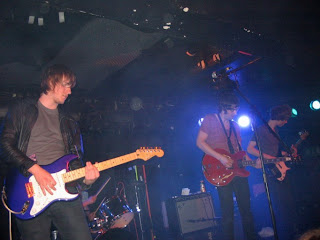 Liam admits to a soft spot for Nottingham and for Rock City. He tells us that their first night on tour was here in October 2007. That night they supported the Coral and played to what he reckons was a crowd of around 20 people. There's one or two more here tonight, a complete sell out in fact.

Highlights include the big sing-a-long to the stark 'Please Don't' and a cracking 'Cavorting'. There's even a new track 'Bo Jangles'.

The new single 'That Kiss' gives the bouncers a brief respite from chucking out the crowd surfers, something I've not seen here for a while. Those people 'probably shouldn't have danced to that song'. Perhaps Enter Shikari taking the mickey last week was the last straw. Unless you're a girl of course, they are never chucked out.

They don't do an encore as such, that would be terribly old fashioned. Instead, the band leave the stage to leave Liam alone to play a couple of tracks solo, 'No You Didn't, No You Don't' and a powerful 'Yesterday Today Probably Tomorrow'. It's all very Noel Gallagher. His admiration for the Gallagher's is very apparent; they say imitation is the sincerest form of flattery. Like the Oasis boys, Fray has a touch of arrogance but also a lot of confidence. 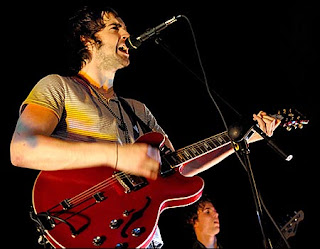 The band return, cue a riotous moshalong to 'If It Wasn't For Me', my Duathlon anthem 'Not Nineteen Forever' and a colossal performance of 'What Took You So Long', even the bouncers give up evicting people.

As it's not such a young crowd tonight, when Fray sings 'You spend too much time sat in your bedroom, on your PC', I look to see if there are any other parents nodding in agreement but no they're all going mental down the front.

We've come in the car and shouldn’t really be hitting the post-gig Leffe’s anyway but we do nip for a swift one. L is good and is on the coke whilst I have something tastefully called 'Bear Ass'. L's even saved a few Mingles for me.

I best name check Saint Daughter again, although she got quite a good deal out of it, badges and t-shirt which came to only 50p less than the price of a ticket.

A good night's cavorting but not snorting, obviously.

Why the title? I was desperate to fit that line into the review... but I just couldn't pull if off.
Posted by FitForNothing at Tuesday, October 14, 2008