Most of my day seems to be taken up with a pre-meeting as a prelude to a week of meetings at work and with trying to source a ticket for tonight's gig for one of Daughter's friends, who we're not even sure, is going. Thankfully the ticket situation all comes together at about ten to five and she joins a full compliment of our household at Rock City. Well apart from the dogs, who we run around the pond again, before we go out. Then we grab a slag sandwich and head into town.

First up Busted, sorry I mean Fightstar. Actually anyone who has seen or heard Fightstar will know that there's is no similarity, whatsoever. In fact, Charlie Simpson seems to want to forget that Busted ever happened at all. Although, apparently some people do still have Busted on their iPod's.

A going concern now since 2003 and now working on their third album, Fightstar are loud and powerful, although not really my cup of tea. They start out their set sounding like the Foo Fighters or Nirvana but end up trying to be Metallica. 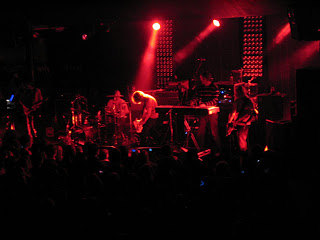 The heavy rock theme continues in between bands as we get treated to the new AC/DC's album played across the PA. It turns out that Grant Nicholas, lead singer of Feeder, really likes it. Something else he tells us, halfway through their set, is of his fond memories of Rock City as he harks back to the days when Feeder were often the first band on stage. I remember one of those occasions, it was back in 1996 and the first time I came across the band. They were supporting Terrovision and I can't really recall much about their performance that evening but I didn't rush out and buy their debut EP 'Swim'. However, three years later, I was hooked on their second album 'Yesterday Went Too Soon', an all time classic and one of the best albums of 1999. Feeder became one of my favourite bands.

I do vividly remember the last time I saw them, in April 2001 at Leicester Polytechnic. That was one hell of a gig. 'Echo Park' was out and 'Buck Rogers' was just about to introduce them to the wider public. All this was before Nicholas's sparing partner; former 'Darling Bud' Jon Lee committed suicide. After which Feeder reinvented themselves, discovered yearning melodies and recorded the excessively mellow 'Comfort in Sound', which was phenomenally successful of course, but sent me to sleep. The band went off to play in front of large crowds of mildly interested people out in Arenaland and I moved on.

Tonight Feeder have kind of tumbled and fallen back to earth as them and I are reunited in a proper venue and as I've already mentioned, for the first time I'm accompanied by a full compliment of L, Daughter who was just three back in 1996 and even Son, making his debut at Nottingham's finest.

Opening with 'We Are the People', the odd choice as the lead single from their excellent new album 'Silent Cry'. The new album is why I'm here. ‘Silent Cry’ is the sound of a band who haven't forgotten what inspired them in the first place. Out has gone the soft rock and instead we get several tracks that are throwback to the riotous pop and heavy guitars of those earlier albums. Therefore, it's odd and regrettable that they don't appear to have as much confidence in the album as I do and opt not to play much of it live. No 'Miss You', 'Itsumo', 'Who's The Enemy' or 'Into The Blue' which is my favourite.

Instead I'm standing there listening to the yearning melody that is 'Feeling A Moment' which I don't care much for, nor for it's uglier sister 'Just The Way I'm Feeling' which they play later. Never mind feeling the moment, it feels like my life is slipping away as they play it. I fear tonight could seriously suffer from an overdose of gentle ballads but things do pick up.

'Shatter' cheers me up, sounding punchy live, polythene-esk. Showing that the band can still play rough when they want to. They hit a bit of a purple patch, as 'Come Back Around' follows, although it doesn't quite hit the spot, the mix seems all wrong, not enough vocal, too much guitar and drums but it improves as it goes along.

Then there's a real treat and the only surprise in the entire set, when they bring out 'We Can't Rewind' from 'Echo Park'. The crowd are appreciative and really get into it. The arms go up in the mosh pit, this is what we came for and the reaction to which gives a lie to the fact that I think the band feel they have to appease the bandwagon jumpers and 'this is our song' cuddling couples.

Then there's the still awesome 'Insomnia' with the other original member, Taka Hirose getting animated with his bass. The three piece swell to five tonight, replacement drummer Mark Richardson ex of Skunk Anansie joined by the two Dean's on guitar and keyboards.

'Fires' is dedicated to their crew again and is rumoured to be their next single. As a song, it's ok but do they really need any more slow burning anthems. 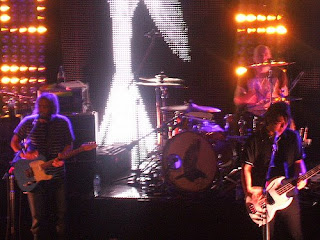 'Pushing The Senses' is lively and 'Sonorous' off the new album sounds pretty tremendous too. Then there's time for a quick kip as they play the aforementioned 'Just The Way I’m Feeling'. Funny thing is the song gets a massive cheer when they start to play it but then the crowd just go quiet, many hit the bar and others I think are nudging their partners, because it's their song.

After 'Tracing Lines', the second single off 'Silent Cry', which is excellent live, it's Marmite time. Either you love it or you loathe it. The band professes to be over it, so sometimes they play it, something they don't. Tonight they do and as soon as the first bar is played, the room lets out a huge roar and pogos up and down as one. Quirky and enjoyable once, 'Buck Rogers' now sounds terribly dated, although it's still oddly popular and I have to confess that it really does get the place jumping.

Then, no, please Grant, not 'Comfort in Sound'. That's far too many yawn-inducing melodies. Even though they do appear to attempt to sex up some of their slower number, the only direction that approach will take them is to the 'Here And Now' tour.

After which, he's obviously feeling rather guilty, so to try and shut up the wizened oldies like me, who are disappointed with the lack of early stuff, he announces something from 'Polythene'. Which you just know is going to be 'High' but it doesn't stop you hoping for 'Cement', 'My Perfect Day' or 'Tangerine', of which I hear one thin hopeful shout. After all, on the last tour in May, he did say that they would relearn and play it but they don't, spoil sports. It would be worth it just to see if he could get Rock City singing 'I know it's sad, life's just a piece of fruit'.

'High' is still very good though and then finally there's 'Lost And Found' complete with added Foo Fighters with the audience providing pretty flawless vocals to 'All My Life' midway through the song. The band are much better when they're rocking out to stuff like that. 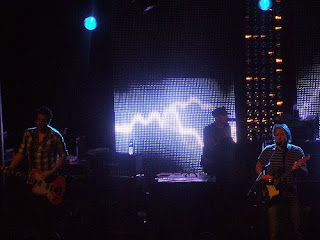 It's a funny crowd tonight, made up of 20 and 30 something’s, with a few teens thrown in for good measure. Despite going down very well with everyone, shouts for an encore are rather weak and the bands return seems rather apologetic.

The encore consisted of a beautiful acoustic version of 'Silent Cry', so good you can almost forgive the omission of 'Yesterday Went Too Soon', nothing though forgives no 'Waiting For Changes'. According to the set list, they considered 'Tumble And Fall' instead, how horrific, lucky escape there then. 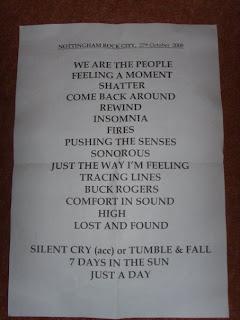 A storming 'Seven Days In The Sun' follows and then it's what the crowd having been nagging for, for the last half hour, the Feeder anthem ‘Just a Day'. Oddly played after the single it was originally a b-side to. It was their fans who loved it so much that they convinced the band to re-release it as an a-side, meaning the track when top 20 twice in 2001. So, the lesson is, listen to your fans... and dust off a few oldies.

In the end there were five tracks from 'Silent Cry' which isn't bad I suppose, considering this was the album they were supposed to be touring, not the singles collection but still a little disappointing on that front, obviously too many yearning melodies and obviously not enough old stuff.

L says they're a right bunch of crowd pleaser's and she's probably right but if she saw them again next year and they played the same set, which they will, she wouldn't be happy.

Predictable, painfully safe at times but actually rather good and Nottingham rocked to it, just not awesome. I even have a sneaking suspicion that Son liked it and Rock City too.

(I tried to take my own photos for this one but it didn't really work out, so I pinched them off the Feeder Forum, sorry)
Posted by FitForNothing at Monday, October 27, 2008