Good In The Face Of Adversity

After getting home about an hour later than planned, thanks to the no show of the Red Arrow last night, I'm up early again, for the longish trip up to Preston, where we have a dog show.

We arrive five minutes too late to walk our first course. This is my fault for drinking too much, getting up too late and then having to stop for petrol but we may not have made it all otherwise. Doggo sits tutting in the boot knowing, I think, that's he's going to have to bail me out again. MD is asleep, oblivious, dreaming of what havoc to wreak today.

Doggo does me proud. I owe him big time. We run the course, not having walked it and go clear. Then the judge sheepishly slopes over, avoiding eye contact like a naughty schoolboy and I know exactly what he's going to say. Yep. The timing didn't work and we're going to have to do it all over again. Cue more tutting from Doggo. However, we are good in the face of adversity, aren't we mate? So we go clear again. We come 17th, which isn't too bad because this is a course for grades 6 and 7 and we're just newbies in grade 6.

We go on to have a rather tremendous day and win two rosettes for 8th and 9th in grade 6. It seems that it suits us at this illustrious level. We mess up our last run in 6/7 but it's still a very good day.

We hurtle back down the M6, listening to the Iain Banks' Wasp Factory on audio book. I read the book, something like twenty years ago and it's weirder than I remembered. It's on Son's A level reading list and even he says it's the dodgiest book ever. L listened to it before I did and she had to resort to the Pianist, about the Jews in Warsaw during World War II for a little light relief.

L and Daughter are already out when I get home even though I'm home before 7pm, they've gone to see Enter Shikari at Rock City. I've never been there that early, hope she got front row.

I don't like to miss a gig, any gig, but I tried to get into the boys from St Albans but I just couldn't do it. The 'moulding together the passion of hardcore and punk with the passion of euphoria and trance', as they call it, just didn't work for me. L reckons their album is quite romantic and she wants to have 'Adieu' played at her funeral. Enter Shikari romantic? Has she been listening to the right album? Perhaps Daughter slipped her something else instead. 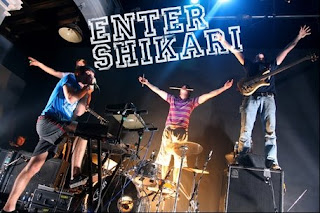 These early starts and finishes are all courtesy of the invention of the 14+ gig. In my day, if you were under eighteen, you had to steal someone else's ID and make yourself a convincing disguise to get into places like Rock City. Which, of course, never worked for me.

These days you can go dressed like a drongo, which is akin to having 'I am under 18' stamped on your forehead, and they'll still let you in. Somehow it's just not the same. I hope one of the above doesn’t try and pull L, or Daughter for that matter.

The downside of the 14+ gig is that stage times can be ridiculously early and for a mid-week gig, for those of us over 14, who have a job, you can still be stuck in the rush hour traffic when the support band come on stage.

Sitting outside at 10pm, waiting to collect them, I realise what a money-spinner these gigs are. The street outside is practically blocked my mummy and daddy's giant people carriers come to collect their offspring. Then I watch some lad who must be mid-twenties but still with 'I am under 18' stamped on his forehead, get in the one in front.

We drive home past Trent Poly where it’s Fresher's week and it looks as if the initiation ceremonies are in full swing.
Posted by FitForNothing at Saturday, October 04, 2008