I'm not at work today and my thoughts turn to lycra, that is because we're heading off to the Manchester Velodrome for the World Cup cycling. L must have enjoyed it when I took her to the World Championships in March because she's keen to come again, although this could have something do with all those men in lycra.

First though she talks me into getting up early, but not too early, to take in a swim and then to take the dogs out on a run.

Then just before lunch, we head off up the M6. On the way, we listen to another John Grisham audio book that L has treated me to, from the library. It's called 'The Client' and L promises me it going to truly evil.

The cycling is a total sell-out, and they say that there are ticket touts in the streets outside, although we didn't see any. Perhaps this could account for the reason that a quarter of the 'sold out' seats remained empty for the whole day. I'm not sure cycling folks would have turned up on spec hoping to pick up a black market ticket. So hopefully the touts lost money.

The British riders simply follow on from where they left off at the World Championships and the Olympics. The expected names such as Wendy Houvenaghel, Victoria Pendleton, Ed Clancy and Jason Kenny delivered medals while Chris Hoy got writers cramp from signing autographs, he wasn't racing this weekend.

The real treat was, and this should strike fear into the other nations, the number of new young riders who impressed as Britain won five of the seven races. In particular 19-year-old Lizzie Armitstead who comprehensively won the points race, a race wholly dominated by the British riders as Lucy Martin came second and Katie Colclough third. 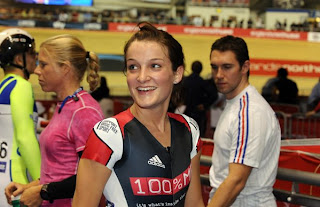 We stayed to the bitter end to see 18-year-old David Daniell turned in an extremely impressive performance to win the kilometre time trial. My only regret for him was that it was already 10:30 and everybody, including us, were making for home and that there wouldn't be many folks around to cheer his presentation. We however had a two-hour drive home.

I know L would prefer some photos of guys in lycra but tough, he's some of the girls. 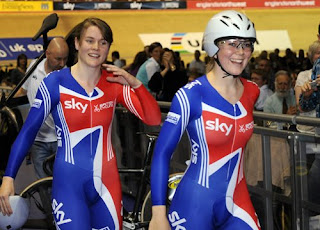 Posted by FitForNothing at Friday, October 31, 2008