Nowhere To Sling My Hammock

A lazy day of sorts. Plenty of time to recover from yesterday, loaf in bed and eventually, walk the dogs. There's not even a match. The East Midlands derby game, Derby v Nottingham Forest is tomorrow.

In the evening, we have another gig and I definitely was talked in to this one. Noah and The Whale at the Rescue Rooms would not have been on my must do list but I'm always up for a quirky Saturday night, so what the hell. L assures me it will be more of an ‘armchair gig’ than Elbow was. It's definitely hammock music and we'll probably all have to wear cardigans. Not that I have one, I wonder if they provide them. I certainly wasn't expecting a crowd, despite their recent success and expected us to be tickets 1 and 2 again but, no, it's a sell out and there's nowhere to sling my hammock.

We arrive just in time to catch the end of a band called 'Flat Earth' and then its very quickly time for the main support act 'Sleeping States' and here we go again. Here's another support band trying desperately to feature in my blog. Ok mate, you're in. Anyone who tries to repair their guitar with a fork deserves a mention. From what I can gather 'Sleeping States' is a chap called Markland Starkie who has an interesting line in instruments and effects boxes together with additional musicians, tonight he joined by another guitarist whose name I forget and a drummer called Rose. Interesting. L seems rather struck on them. 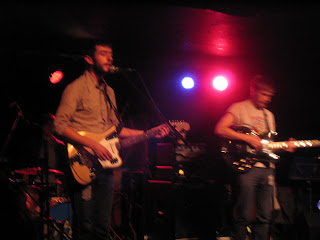 So, to Noah and Co, who first show us a strange short film with a Beach Boys accompaniment. Thankfully, they don't take the stage in those awful blue and yellow outfits and only one of them is wearing anything that could be loosely called a cardigan.

I think I counted seven of them on the small stage, a brass section of two, a chap who plays a mean violin, a bass player, a drummer and a lass on keyboards. Then there's lead singer Charlie Fink, who predictably has a touch of Seth Lakeman about him but this is a more ballsy Lakeman.

They start off at a good pace and throw in 'Two Atoms In A Molecule' and 'Shape Of My Heart' early, which got the crowd, a mix of oldies and youngsters nodding along to their pop-folk. I look around but don't see any cardies and thankfully there's no one in Noel Edmonds type jumpers, meaning that L's venture capitalists aren't in.

Noah play a selection of tracks from their debut album 'Peaceful The World Lays Me Down' and it has to be said that they sound better live than on record. They also throw in an older track, that I have on mp3, the excellent pre-album 'Beating'. 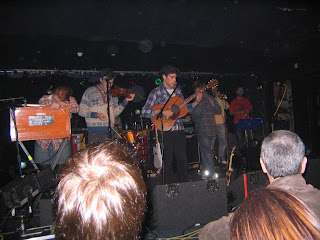 Things started to drag a bit in the middle of their set when they played some of their slower numbers, together with a new song that Charlie Fink professes to be so top secret that he's not named it yet.

Things picked up again with 'Rocks and Daggers' and then came that hit. I look around and see that I'm the only one singing the words to 'Brim Full Of Asha' as they play 'Five Years Time'. Surely I'm not the only person who thinks the two tracks are interchangeable with added Laura Marling obviously. Not that Ms Marling actually plays with the band any more, although by sheer coincidence, she will be on the very same stage this coming Tuesday. 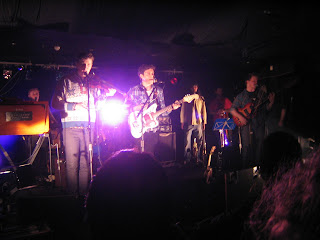 One more track and then they briefly hop off stage but come almost straight back on, as they're only about two minutes away from the 10pm curfew. They don't play '2 Bodies 1 Heart', the scheduled encore, which could have been used to liven up the middle of the set, instead they treated us with a cover of 'Girlfriend in a Coma', which was totally excellent.

A nice, pleasant gig but I was well ready for a beer afterwards.

We head out into the rain and dive into the Hand & Heart which is packed, so we move up the road to the Ropewalk, which has no beer. I think L is getting a bit peeved at me as we cross the road to the Borlase which has a good drop of Titantic but it's not a comfortable pub so we end up back at the Ropewalk on the Leffe's. Three each, which wasn't our fault because we had to wait until the rain stopped.
Posted by FitForNothing at Saturday, November 01, 2008