This morning I take the dogs on the park, whilst L runs and goes to gym, totally outdoing me but I think I have the worst of the Old Expensive from last night.

Instead, I settle down to watch a proper game of blood and guts football and the FA Cup 2nd Round match between Histon and Leeds. It's hilarious. With Leeds losing 1-0 and struggling to play their football on the swamp of a pitch, I text my friend the Leeds fan to tell him how much I'm enjoying the entertainment. The spoilsport texts back instructing me to turn the TV off, as Leeds go out the cup.

The smile is then wiped off my face as Derby draw non-league Forest Green away from home in the next round. Oh dear, that’s us gone as well then.

Later we wander down to Broadway to see 'Waltz with Bashir' in which Israeli director Ari Folman tells a personal tale about the first Lebanon War in 1982. It's basically a documentary but in animated form.

Folman meets a friend in a bar who recounts a reoccurring nightmare he has where he is chased by 26 ferocious dogs. This, they conclude, is connected to his involvement in the war. Folman himself though, does not remember much about it. So, he meets up with other army colleagues, as well as a psychologist and the journalist Ron Ben-Yishai to try to jog his memory which he seems to have effectively repressed, especially concerning events leading up to the notorious Sabra and Shatila massacre. Through a series of conversations, Folman slowly reveals his past, showing the events he witnessed and was involved in, in the form of flashback. 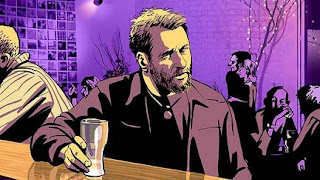 It's an interesting history lesson, although taken from his point of view, but I found it a bit messy and bitty. It didn't really flow to any set pattern, like his memory I suppose, as we gradually build up to the massacre. 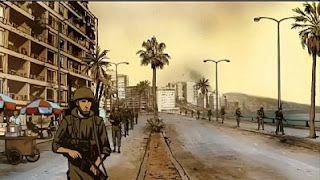 The allies of the Israelis were the Lebanese Christian Phalangists and when the Lebanese President, Bashir Gemayel, is assassinated, they are allowed to go into the Sabra and Shatila refugee camps to hunt for terrorists. Instead, they killed at least 800 Palestinian civilians in revenge, including women and children, whilst the Israelis stood by and watched. The army even fired flares into the night sky to provide lighting for the Phalangist's mission. At the end of the film, real footage of the discovery of the massacre is shown, presenting graphic pictures of the corpses.

I think being animated, and there was no doubt that the animation was magnificent, it was hard to identify with Folman and there was no character building to help you with this. I didn't feel I knew Ari Folman at all, so although I cared about what happened generally, I didn't particularly care about his own involvement. 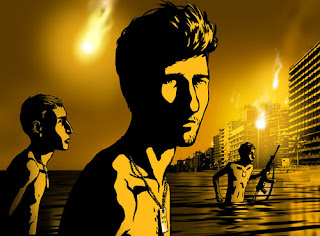 Why did they use animation? Probably simply because they could be more controversial than they could have been on film.

Still it was a thought-provoking comment on the war, the dreadful massacre and the soldiers, who came across as a confused, scared and ill prepared bunch. In that sense, it got its message across. It was a decent, powerful piece of art but as a film, for me, it didn't really cut it.
Posted by FitForNothing at Sunday, November 30, 2008