What Height The Zips?

We get up far too early but this tends to happen these days with a hyperactive puppy in the house. After years of thought, I've finally bought a running jacket and this morning is the perfect time to test it out. It's raining. So I head out into the elements with L, the hyper one and the reluctant one that doesn't like the rain. I'm not totally convinced by the jacket but it keeps me dry and L thinks I look good in it, which is good enough for me. Although she doesn't specify at what height I should have the zips.

Beyond that, it's a lazy day. As the media aren't covering it in any shape or form I have to check on the British Cycling website to see how we are doing in Melbourne, Australia. Seems that our team of three have won the women's team pursuit. That's despite Elizabeth Armitstead's crash yesterday in the points race qualifier that required eight stitches in her arm. 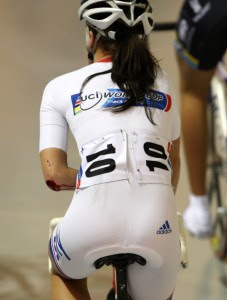 Daughter heads off out again, it's under 18s clubbing at the Rig underneath Rock City tonight. L and I head off for some romance and the 'Baader Meinhof Komplex'.

A group of West German students are demonstrating against the Shah of Iran, who is visiting the country. They are also protesting against their own government, who they accuse of being a puppet in the hands of imperialist America. Then aided and abetted by the police, supporters of the Shah pick a fight with the students. Together they senselessly beat the demonstrators to a pulp. The police threaten a protester with a gun to his head, it goes off, although possibly by accident but a martyr is born.

On this violent note the film starts and it doesn't get any less horrific from there onwards. Some of the protesters have no time for peaceful objections, they want revolution now. They form the Red Army Faction (RAF), whose aims are to turn things around by stronger means.

Among these are journalist Ulrike Meinhof, known for writing biting critiques against the government, and part-time criminal Andreas Baader, because of their involvement the RAF became known as the Baader-Meinhof group. The film focuses primarily on these two and Baader's girlfriend, Gudrun Ensslin, a unwavering fanatic if ever there was one.

At first, the group content themselves with committing bank robberies for the cause and gain some sympathetic support from normal Germans but soon they turned to killing people.

What follows in the film is a detailed history of the actions of the RAF and their battles with the German establishment, as the film attempts to squeeze 10 years of history into two and a half hours. The sheer magnitude of the events makes this difficult, so the movie travels through history at breakneck pace without taking time to delve into any particular aspect at any length or to attempt to decipher the thoughts of those behind the RAF. Not that many of them seemed to have much idea of what they wanted to achieve anyway. 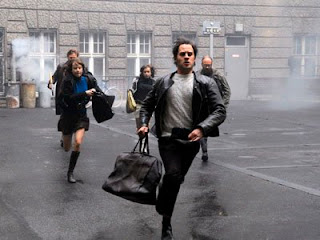 It may not be hot on detail but the film does at times have you clinging to the edge of your seat as it captures the essence of the tensions that existed at the time. Kidnaps, executions and explosions come fast and furious as plans are hatched and then usually messed up. It's still a fascinating story and I remember many of the events happening at the time.

When they are not killing or blowing things up, the group spend a lot of their time naked or with a cigarette in their mouths. Both seem to be compulsory if you're in the RAF. 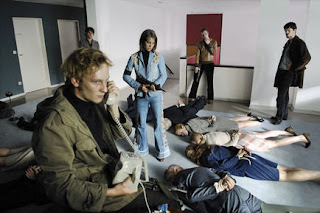 Eventually the authorities catch up with them and the ringleaders are dumped in prison. Not happy with the conditions they are in, they go on collective hunger strike and after the death of one of them, Holger Meins, they are all reunited in Stuttgart's Stammheim prison where their trial would eventually take place.

Collectively their mental state starts to crumble and Meinhof falls out with the others as plans to get them released continually fail. She doesn't make it to the end of the trial and hung herself in her cell. Although it was claimed by the RAF that she was murdered by the authorities. After a long and expensive trial, the remaining defendants, primarily Baader, Ensslin and Jan-Carl Raspe were convicted and sentenced to life imprisonment.

Outside of Stammheim, the violence continued, driven by a new generation of fighters in a campaign in support of their jailed comrades, still trying to secure their release. Their motivations remain a mystery, you think perhaps some of the group just joined because they fancied a bit of bloodshed. In a final throw of the dice, the RAF kidnapped Hanns Schleyer, the chairman of the German Employers' Organisation, and a group of Palestinian's hijacked a Lufthansa Flight on behalf of the RAF. 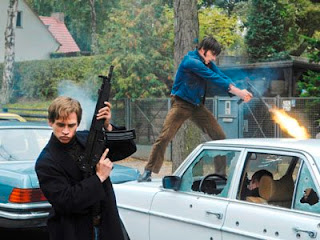 It was all in vain, the German government had no intention of ever releasing them. The terrorists saw the writing on the wall and inside Stammheim, they agreed to a suicide pact. The next morning, they were all found dead in their cells. None of this saved Schleyer, who was later executed in the woods.

After the pace of the film, the end credits seem to come upon you a bit abruptly.

It's an excellent and well acted film that neither approves nor disapproves of it's subject matter. Today, many people are still objecting to much the same things, just less violently, re: the Bush administration, Iraq, Afghanistan, capitalism in general. Horst Herold, the director of the German Police said that he could only cure the symptoms of the RAF disease but not the disease itself. In part admitting that the RAF were not altogether wrong in their thoughts, just badly wrong in their actions.

We complete the depression with an episode of South Riding, which seems positively upbeat by comparison.
Posted by FitForNothing at Sunday, November 23, 2008