Its Good To Talk

This morning both L and I run the Heanor 10k at Shipley Park. As I've not been 100% this week and have barely trained, I have resigned myself to just jogging round. So, the speedy folks can try what they like but I'm not going to be wound up. I'm not going to take the bait. Any bait.

Therefore, after the race starts, I let all the nutters go on ahead and settle down in the middle of the field where I hope to catch up on some gossip from my fellow runners. L assures me that this is what happens in races when you're not 'eyeballs out' at the front. She tells me how jolly friendly it all is. I'll try anything once. 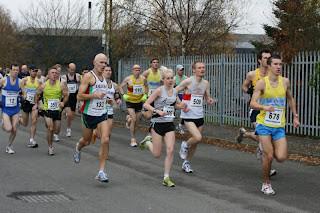 So far, L appears to be wrong because no one seems to want to talk to me and there's just as many shady tactics going on or perhaps I'm just not further back enough but there are limits. Mid-field is terribly slow, even for a jog, so I have to move it on a bit.

It's not the best of courses; the first stretch is along a really busy road. This means if you move out to overtake someone, you run the risk of being mown down by a passing juggernaut. Not a pleasant prospect. Despite this, one chap is employing the shady tactics I mentioned earlier. He keeps passing me and then slowing down, forcing me out in the traffic to overtake him again. I'm not up for a chat with him, even if he wanted one.

The motorway they've had us running along is then forsaken for a muddy potholed track. One extreme to another. Finally, as we come back into Shipley Park, they move us onto terra firma, a smooth concrete road, only immediately to divert us up a footpath along the riverbank. As you may gather, not my favourite course. Multi terrain I don't do.

I cross the line having done my slowest 10k ever, 42:34 but still not bad and with still over 80% of the field behind me. I was jogging, so what were the rest of them messing around at? The winner did it in 30 mins, the smart a***.

I head back to the car, unleash the collies and return to the finish to cheer on L. I wonder if she's had more luck than I have with this gossip lark.

They must have had a lot of rain because the grass is well wet and muddy. I do a spot of impromptu grass skiing as I'm towed along by my overenthusiastic boys.

Back home L sends me outside with MD, so that she can do some hoovering. Have I mentioned that MD has a rather volatile relationship with the hoover? Problem is; distracting MD was only half the problem. Doggo now seems to have taken up the baton and started attacking the hoover. He's never done that in the seven years of his existence. That puppy is a bad influence on him.

It is based on a novel by Iceland's most successful crime writer, Arnaldur Indriðason. Not that I've heard of him. I also don't know any Icelandic actors and I'm not sure how many the country has, so we've probably witnessed all of them in one go.

Jar City begins with the discovery of a body in an apartment and separately, a genetic researcher called Örn burying his four-year-old daughter who has died from a rare illness. Experienced detective Erlandur investigates and the trail takes him back 30 years when there were allegations of rape, police corruption, an unsolved disappearance and the death of another young girl from the same rare illness. 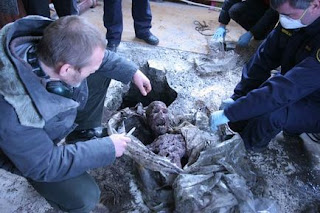 Erlandur also has his hands full with his own drug-addicted daughter who is constantly trying to get money off him and has now gotten herself pregnant. 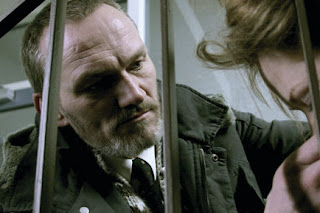 In the end, the mystery is untangled and everything ties together, along the way, we are treated to some dour Icelandic characters and dodgy criminals, some of which are on the police payroll.

I wasn't expecting much but I quite liked it and it sustained my interest all the way through. An intriguing film, which managed to go back thirty years without any flashbacks. Then just to catch me out, it flashed back a couple of times to the later day murder. It was particularly confusing because two of the lead characters looked a bit similar.

Jar City is an excellent thriller, although a bit like a TV police series, Colombo meets CSI, that sort of thing. The difference was, it was cliché and unnecessary swearing free, which obviously it wouldn't have been had it been made in America, unless of course they just omitted them from the subtitles. Then of course, they had the advantage of the outstanding location. We were treated to some great shots of the bleak terrain, although there wasn't enough snow. 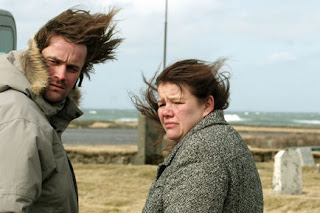 The pièce de résistance was the gruesome scene of Erlandur pulling up at the fast food drive-in, ordering his takeaway meal and then taking his sheep's head home, where he eats it with his penknife, starting with the eyeball of course. Welcome to Iceland.

We recover from the dourness with a few wonderful 5.9% Bateman's Victory's ale before rounding things off in the curry house.
Posted by FitForNothing at Sunday, November 16, 2008