Derby v Forest today at the really unhelpful kick-off time of 1.15pm, thanks for that Sky. So not much chance for a laze in bed and instead I'm off out around the park in the drizzle with the dogs.

Mostly the match was a complete let down, as local derby's often are, and ended in a pretty dull 1-1 draw despite referee Stuart Attwell's attempts to spice up the encounter by unnecessarily booking eight players and sending off Forest midfielder Lewis McGugan.

The referee though was saving his best until last. In the last few minutes, Attwell, his mind obviously addled (no pun intended) by chatting up Rebecca Addlington pre-game, came into his own.

Already notorious for awarding Reading’s ’goal that never was’, Attwell started hallucinating in the closing minutes and seeing 'infringements that never were'.

With the game already into injury time, Derby midfielder Miles Addison rose to head in the 'winner' and the place erupted... until Attwell informed the players that he had decided to tear up the 'advantage' rule and instead award a penalty to Derby for an alleged handball.

I suppose it was Derby's fault that they then missed the penalty, saved by ex-Derby player and local boy, Lee Camp, who is currently on loan at Forest from Queens Park Rangers but never mind, two corners later, Addison again set the net billowing with another unstoppable header. Again, the stadium erupted. Again, everybody thought Derby had won it. Again, Attwell had other ideas and disallowed it for an alleged push.

Oh well, just a normal day down at Pride Park.

Back at home, we have Jamie Oliver for tea or rather several of his recipes, most of which are good but Jamie please note, it was your fault that the Yorkshire puddings didn't work out. So L says anyway.

Then I catch up on the rest of the weekends cycling, total domination for our riders in Manchester. Jason Kenny sums it up really... 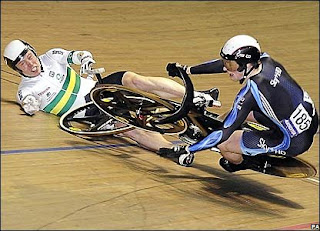 he doesn't even have to be on his bike to win. 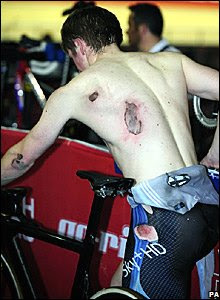 (that's for you dear, a half naked man in lycra)
Posted by FitForNothing at Sunday, November 02, 2008