After three bikes, today the run and the rain even stopped briefly for me, which can't be bad.

L's out with the boys on their usual constitutional. Once back home, MD starts his usual routine of trying to stop her leaving for work by biting her feet. She's threatening to start wearing wellies around the house. She thinks she has problems... an Arizona jogger had a similar problem with a fox attacking her feet, before he progressed to her knee and then when she tried to push it off, it clamped its jaws around her arm and wouldn't let go. She eventually got to her car, managed to free herself and trapped the fox in the boot. Perhaps she should have worn wellies too.

Nottingham yesterday unveiled a bronze statue of Brian Clough and around 4,000 turned up to see the unveiling. Someone has already put a red and white scarf around his neck. I wonder how the drunks will decorate it on a Saturday night. 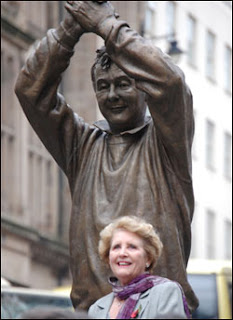 In the evening we try and take the dogs down the local but Doggo is having none of it, too many fireworks still being ignited around our neighbourhood. So it's just L and I, oh and the fearless one, MD isn't at all fazed by the bangs.
Posted by FitForNothing at Friday, November 07, 2008