There Is No Why

Third day in a row on the bike and my legs are very tired, so it's not a good day to race someone but I'm afraid I just couldn’t resist. I start a tussle with a fellow cyclist that I don't really have the legs to see through. He's far too quick for me, or at least that's what I think at first, so I let him go... but then it's a bit like when you're offered seconds of dessert and you say oh no I shouldn't but then... oh go on then. So, sod it, I chase him down, he is on straight handlebars after all. Then just as I'm moving in for the kill, he turns off. So why did I bother? There is no why.

L's on her bike today for the first time in eons and she's having trouble with cyclists too. It doesn't take much to put her off cycling and this came on top of a traumatic walk with the dogs; it appears that the effects of my energy bar haven't quite left MD's system yet.

It seems to be a day for bike trouble. On the way home, a chap who clearly hadn't seen me, despite me riding straight at his face with my not unsubstantial front light illuminating up his face, still pulls out in front of me.

Then there's a woman who's too busy texting to keep control of her car and keeps veering towards the curb. I know she's texting because I saw her doing it at the lights and again as she was queuing for the roundabout. She evidently hasn't seen me either or for that matter, any of the other road users. I give her a wide berth.

I get home still alive and find that the chicken legs that L left out for MD, I mean the kids' tea, are still there. I'd half expected him to have climbed up onto the worktops and helped himself. Of course, he would have talked Doggo into eating one as well. I can just seeing him, nudging him... go on, you know you want to and then later the 'he made me do it' look on Doggo's face when we reprimand them both.

The boys get a 'spin' around the pond and L joins us again, even though she's not keen on the pond in the dark. She's always frightened she's going to fall. She's the lucky one, she's not the one strapped to a riotous puppy. She's only accompanying us because she's worried I might be outdoing her... but check this out. Today she's cycled to the gym, done gym, cycled to work, cycled back to the gym to do a spin class, then done yoga class, cycled back to work, cycled home and has now a run with me and the dogs.

After all that we still make good time for tonight's gig, although because it's another of those early gigs and as there are two support bands, we don't get there anywhere near early enough to catch Amazing Baby, who are the first of the three New York bands on tonight. They are over promoting their catchily titled 'Infinite F***ing Cross EP', available on free download you know.

We do get to see some of Violens, who have shades of headliners Mgmt about them but with a muddier sound or perhaps that's just coming from a bad mix. I feel there's something decent and quite poppy in there fighting to get out, I'm just not sure what. Further investigation probably required. 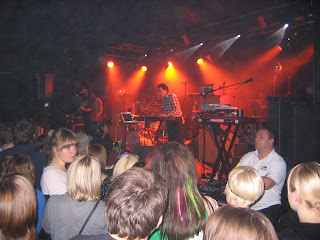 We nearly caught Mgmt at the Bodega Social back in February but after they were on Jools that gig though sold out instantly but they're soon back in Nottingham and now selling out the much bigger Rock City.

Opening with 'Weekend Wars', they proceeded to chalk off tracks from their excellent album 'Oracular Spectacular' at a considerable rate of knots. All of which convert impressively from CD to the live setting, sounding 'Spectacular' indeed. In fact, it's one of the best opening sequences to a gig I've seen this year.

Mgmt are primarily Ben Goldwasser, who twiddles knobs and plays all things electronic, along with Andrew VanWyngarden the front man, vocalist and lead guitarist. For this tour, the band has been extended to a five piece with the addition of a drummer, a bass player and a second guitarist. The extra guitar really works for me; I love the effect of all that guitar noise, blended over the top of a slightly psychedelic keyboard sound and some awesome drumming. They are also fascinating to watch as musicians, working well as a unit and showing not inconsiderable talent.

One thing they are not very good at is conversing with the crowd, there is little or no banter all night and what there is comes from guitarist, James Richardson.

After the 5th album track 'Pieces Of What', L and I look at each, both thinking the same thing, that they're soon going to run out of material. Then as 'Time To Pretend' sends everyone mental, I wonder how they're going to top that. Perhaps now would be a good time to get off the stage, despite the fact they've only put half an hour on the clock. It's all been impressive so far and every track has gone down well with the enthusiastic crowd. 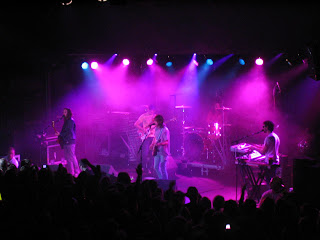 I'm not totally sure what happens next, whether they play one track, two or maybe even four. Whether this is a collection of b-sides, new songs or songs they made when they were called Management and produced an album called 'Climbing To New Lows' in 2005, I don't know. I, like most of the crowd, only have the recent album. It could have a b-side called 'Metanoia', which also enjoyed a limited release in its own right. Metanoia means to change, and apparently the song is made up of 'bites' of different rock genres and as it also clocks in at nearly 14 minutes, that could be the answer. Who knows? I'm certainly not sure. One thing it does do it disperse the considerable momentum they had built up to 'Time To Pretend' and it was such a shame that they then lost it.

The band then revert to the disco thump of the song about eels... 'Electric Feel' before 'The Handshake' closes the set to vociferous applause. 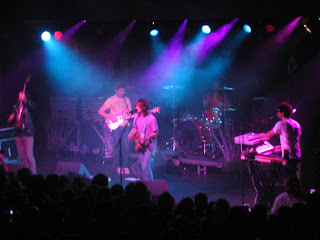 The band are shouted back to play the two missing tracks from the album. They close with an almost instrument free rendition of 'Kids', it's all programmed keyboard work, which gets Rock City bouncing like I haven't seen since... well last week and Feeder's Buck Rogers but I must say this out bounces it.

In summary, it was half of one of the best gigs of the year. If Mgmt can produce a second album anywhere near as good as their first the resulting gigs are going to be something else.

L reckons she's earned a Leffe, so we hit the H&H. I'm told to remind her that she's swimming in the morning, so we stop at two.
Posted by FitForNothing at Thursday, November 06, 2008