Apparently, I'm being far too complimentary about MD and people are getting the wrong impression about our adorable puppy or the 'hell rat' as Daughter lovingly calls him, that is when she's in a good mood. I'm told I've not been giving the full story because I don't mention incidents like how he disrupts our lie-ins. He is rather adept at hurling himself onto the bed with his freshly muddied paws, spilling coffee, destroying the newspaper and attempting to disrupt any passion that we would like to inject into our lie in. As I've said, he really is adorable.

So, the best thing to do is to get up and take the blighter on the park but of course he's bitten though his harness and first I have to do a repair job, which holds only until he attempts to see off a dog four times his size. Boys will be boys.

In the afternoon, whilst 'hell rat' snoozes, L and I go to the new gym at the Tennis Centre. I'm rubbish; I find I have no energy, which is a shame because they now have a treadmill with levers to control your speed rather than buttons, much easier. Someone up there must be listening to me after all. Although I would still like a treadmill with better software, even this new one is hopeless on that front.

Tonight we're off to see a comedian that Daughter has nagged us into. As it's at the intimate Playhouse and as I like to practice 'open mind theory', I agree to give it ago.

I need to make it clear that I don't like comedians. Never really have, I just don't find people trying to be funny, funny and as I've gotten older even less so. Especially if they're American but that's another story. Thankfully, Jason Manford isn't American, he's from Manchester and a tall, City supporting, football manager playing, tee-total, Mick Hucknall hating, relatively nice sort of 'fat Michael Owen' (his words). He's also a team captain on Channel 4's '8 Out Of 10 Cats', which means absolutely nothing to me.

The thing is though; he's actually quite good, amusing even. Obviously, I don't resort to the great loud snorts of laughter that get some people singled out by Manford for special attention but I do have a quiet chuckle to myself. In fact, one chap's awful laugh is the only thing that seems to unsettle Manford all night.

Manford is on a huge 60 date tour and tonight the Playhouse is almost full to its capacity of 600 people. As Manford quips, it probably would have been full had it not been for the Biblical weather. What's impresses me most is Manford's ability to adlib about such matters, like the stage, which is setup for Macbeth. Not material he could have readily used elsewhere. This perhaps also shows he's done his preparation. He's unnecessarily dismissive of Macbeth, and occasionally falls back on touches of laddism like that to bolster his set but he doesn't really need to. I bet he likes Macbeth really. Some of his material is predictable but mostly it's quite fresh and laddism aside his set is largely clean.

He also makes light of the fact that he extended his current tour on the back of getting a regular slot on 'Tonight With Jonathan Ross'. That is before that show was taken off the air following the shenanigans of Ross and Russell Brand. 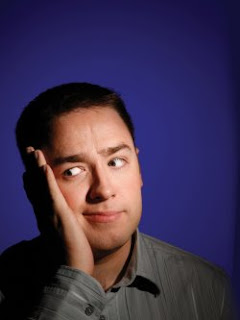 He's very good value for money, after his allotted two halves of 45 minutes (of course), he then encores for 40 minutes with an impressive Q&A session, adlibbing again.

He's miles better than the last comedian I saw, which was Richard Herring. So well chosen by Daughter. I suppose I should give him '8 out of 10' but due to extra time, I'm tempted to make it a 9 and as I said, I don't like comedians.
Posted by FitForNothing at Sunday, November 09, 2008