It must have been cold last night. I thought I'd woken up next to one of the collie but no, it was just L in a fleece. Shouldn't complain she was keen to share her warmth.

There's a match tonight, so rather than cycling I opt to drive to my parents place near Derby and run to work from there. As I left, I saw Daughter walking some saintly grey collie, we really ought to get one like that...

Looks like L's offloaded Doggo so that she can do a spot of heelwork training with MD. Although she always protests that it doesn't seem to be going into his little head. Which implies that perhaps it isn't going that well.

The run takes just over 40 minutes. Which is a reasonable time for 10k but unfortunately it's not 10k it's only 9.2k. It's also cold and windy, so I go for the fleece and gloves option, which obviously makes me too hot by the time I get to work.

There's a bit in the news about Britain's biggest gigaholic, a chap called Ray Morrissey, who claims to have been to more than 5,000 gigs over 35 years. So it looks like I've got a bit of catching up to do but you're up there to be shot at Ray. 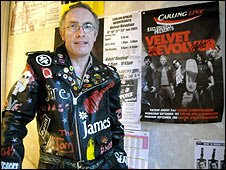 It's manic at work, thanks to Gordon. Customers are ringing up left, right and centre, wondering if their computer systems are going to crash because of the VAT change. Of course they're not... fingers crossed. I don’t think Gordon has considered how many IT systems he's going to mess up.

After work I run the 9.2k back to my parents house, bouncing along, singing 'I'd come a running', Kings Of Leon's 'On Call', which has nothing to do with running but I'm not fussy.

I make it there without being ran over despite the dark country lanes. When we take Doggo out running, he has his running jacket on, which has lights on it. I'll have to ask Santa for one the same. Also I would just get my night vision going, then some car would dazzle me and the footpath would disappear. Anyhow I make it in one piece.

The match is a lesson in how not to defend. Jordan Stewart delivers Preston an early Christmas present but then makes up for it with a stunning goal. The game finishes 2-2.

A quick pint and then home to L, who's being naughty with the alcohol again, so I keep her company with a port. Well it is nearly Christmas, well that's the excuse everyone else seems to be using.
Posted by FitForNothing at Tuesday, November 25, 2008