My illness is fading I think. Even L says I seem more sprightly this morning. She may be right, possibly only a collie sucking the bedclothes between us, prevented us being late for work.

Despite feeling sprightly, I still wimp out and take the bus. With a race on Sunday, I don't wish to risk further upsetting the delicate equilibrium that is my body at the moment. It was almost a costly decision, as I had to step over a bucket full of loose change to get on the bus. Quite dangerous it was. I wonder if Health & Safety at the bus company have been informed. It wouldn't be Children in Need tonight by any chance would it?

Once at work, I have to grin and bear it as my colleague celebrates the first 'five in a row'. That is five consecutive days on the bike. I console myself in that it's only 100 miles in total and my previous four in a row record adds up to nearly 120 miles. In any case, I could do five physically, logistically it's not so easy and now he reckons he's taking the whole of next week off, which somehow dilutes the whole achievement.

Someone spots a group of Mexican bandits wandering up our road, rattling tins and the whole company pretends to not be in. We're not charity adverse really but I have a feeling we're going to get a whole day of this. In the end, we send a salesman down with the company credit card. That gets rid of them.

I hope there are none of these silly outfits in the pub tonight; it doesn’t take much to unhinge a collie.

We walk over to the pub in Beeston and charity collectors aside, there's another reason why we need our dogs to be on their best behaviour. We don't want a situation like the one with Hatty the Lakeland terrier. She was barred from her local in Prestatyn for chewing beer mats. I point this out to MD, as I remove his teeth from one of the pub tables.

She's now been allowed back in but only if she wears a high-visibility vest, so that she can be seen at all times. The landlord didn't have much choice really, as his dog loving regulars threatened to start boycotting the pub. 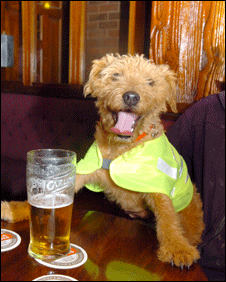 Posted by FitForNothing at Friday, November 14, 2008