I get up at something like 5.45am, take Doggo out, and then bus/run to work.

There's been a bit of a fuss this week about university initiation ceremonies. The University of Gloucestershire has caught most of the flack because some of their students were photographed with Tesco's bags over their heads, whilst drinking and vomiting. Is this news? And are they sure it's Gloucester and not just footage of a typical night out in Nottingham.

One student said that he was persuaded to drink excessively and then run naked through the town. Yep, happens all the time round here mate.

Another student said that when she applied to join the hockey team, she was told to drink an intoxicating mixture of beer, spirits, alcopops, and wine. Well that's all you can get in some of the bars and they charge you £2 a bottle for it.

They also eat some pretty disgusting stuff on these initiation nights. I believe cat food, eggs and breakfast cereal topped with Bovril was mentioned, which will give some of the takeaway ideas.

So when you see a group of folks out this weekend, drinking heavily, whilst lighting matches in their crotches or eating raw fish that they've just retrieved from down their cleavage. It's just an initiation ceremony; everyone will be back to normal, simply drinking and vomiting before too long. 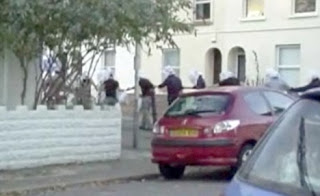 At lunch, because my colleague has had to leave his car at work because he's having his driveway resurfaced at home, we use his car to do a bonus pub trip. The problem was that they weren’t expecting us and didn’t have cottage pie on. Another disaster was that, having already decided not to have my first choice beer, a porter, because it was 4.8%, my second choice was off. When I tell L, she quickly emails to ask whether I mean 'Off' or 'Off', because there's a succinct difference. It was ‘off’, as in, the barmaid pulled me a pint but wouldn’t give it to me. Not L's kind of, slightly on the turn, ‘off’. She loves her beer like that. That's my inimitable girl for you.

We seem to keep playing squash in different venues and at different times at the moment. It's nice to keep my opponent guessing, and on his toes, not that it does me any good in the games. He emails to check that I haven't changed the sport back to tennis. As if, I just hope he doesn't forget the shuttlecocks.

After another defeat because shifting the times and venues didn't work again, I head home to L, to inspect her new, more athletic style, haircut. So good, it warrants opening a bottle of red and plying the inimitable one with alcohol.
Posted by FitForNothing at Thursday, October 02, 2008