A long lie in today and a fruitful one it is too. Then I'm off on the park with the wayward boys whilst L goes out for a 'plod', her words not mine.

Doggo, who has always preferred to stride imperiously ahead and simply saw me as a impediment to such progress, is a saint in his halti. Which I actually get stuck around his head and can't unclip him for it, so he could have ended up wearing it permanently, if I hadn't managed to force it off over his ears.

I get back and feed the dogs who, as as soon as my back is turned, swap bowls. It's as if they have some unwritten code about this. It will be so much easier when they’re both on the same food.

In the afternoon, because I have no event, we hit the gym. I do 5km on the treadmill and then 2km on the rowing machine.

In the evening Daughter goes out bopping. L had suggested we head to Cast and bus her home. Suspiciously, when she emailed this suggestion to me, it was entitled ‘alcohol units’, as if she knew we shouldn't. We ought to be AF today and amazingly, we are. Daughter gets a lift from another source.

Tomorrow we're at Rock City to see Feeder, it's in the news today that their crew's tour bus exploded on the M62 as they travelled down from Glasgow to Lincoln. A local branch of a sports chain donated clothes to the band's crew, who lost all their clothes in the fire. The merchandise and catering were also destroyed, but the band were back on stage at the Engine Shed tonight where apparently they dedicated 'Fires' to their crew. 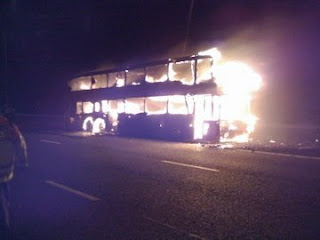 Posted by FitForNothing at Sunday, October 26, 2008