Its 3 degrees this morning, so a bit nippy. I hope that this is a sign we're going to have a good winter, as it still only early October. There's already been quite a bit of snow fallen in the places that matter.

My run in isn't the best, I overdress due to the cold and then overheat but once you've started running you can't stop to undress, can you. Then about a mile from work, something at the back of my knee goes. Not good, considering the 10k on Sunday.

L's still circumnavigating the virtual channel, only 990 lengths to go. After which she'll be looking for a new challenge. She's pondering Loch Lomond but the possibilities are endless. The Panama Canal? Suez Canal? The Nile? The Mississippi? The River Trent?

I get home and quickly take the dogs out before grabbing some toast; we're at the theatre tonight. L's not left work yet and will meet us there. Despite working late, she still claims to have been a good girl and not had a Mingle. Keep that up and she’ll have earned a Leffe but of course if she's still being a good girl, she’d turn it down.

As it happens, Daughter and I get to the theatre to find the 'good girl' drinking the petty cash. We're late and having finished her own Leffe, she's about to start on mine.

Tonight we're here to see 'All Quiet on the Western Front'. Erich Maria Remarque's book had never been adapted for stage until Robin Kingsland and Giles Croft of the Nottingham Playhouse produced this production two years ago. Now it's back and about to go out on a nationwide tour.

It’s the story of Paul Bäumer and his mates, who naïvely enlist in the German army, after being influenced by the patriotic fervour of their schoolmaster. What enthusiasm they had for the cause, soon turns to disillusionment, as life in the trenches of World War I turns out to be a little different from what they were expecting. The story is told from the German point of view and delivers the message that these soldiers too had no axe to grind with the enemy and were simply doing what they're told, nothing but pawns in the game of war.

James Alexandrou takes the lead role and is impressive as Paul Bäumer. After a decade on Eastenders, Alexandrou got bored with life on the soap and moved to the stage, where he's performed in six plays including a couple of Shakespeare's and a Pinter.

The play is enthralling and could have been really bleak but the mood is lightened by the camaraderie of the boys and the addition of moments of humour. The boys flapping their arms to double as a goose, barking to be a dog, or play naked as they emerge from the river for a liaison with some French girls, well... their fellow male cast members in shawls.

It's all acted out to the accompaniment of on stage percussion creating gunfire and the banging of the metal gantry indicating the bombs. Although a little heavy on the eardrums at times! 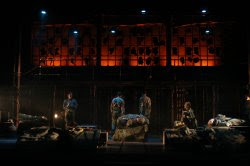 The war claims Bäumer's childhood friends one by one but as the end of the war approaches Bäumer is lost in no man’s land, where he cradles the body of a soldier he's just killed. He promises to write to the lad's wife and child to explain but he doesn't get the chance.

Kat, an the older solider who all the boys looked up to, is the last of Bäumer's friends to die. When Kat is shot, Bäumer carries him back to camp on his back, only to discover upon their arrival that he is already dead. At which point Bäumer has just about had enough.

At the time of his own death, the front was so quiet that the army dispatches for the day read that there was nothing new to report. Finally, it is all quiet on the Western Front because there was barely anyone left to kill.
Posted by FitForNothing at Thursday, October 09, 2008