A Day At The Wrong Office

We're in Sheffield this morning for the Great Yorkshire 10k Run. It was expensive but I'm hoping that the increased competition, 6,000 entries, will inspire me and carry me to great things.

I could have done Lichfield for half the price, which would perhaps have been a prettier race but pretty would have been wasted on me, I wouldn’t have noticed. Sheffield is a rather dull out and back, which sounds ideal. L questions my sense of adventure. I like to leave that at the start line. Dull does it for me in 10k’s. On a nice straight, out and back, you can see what you’re chasing.

We take one dog, just MD because Doggo is a bit of a handful at races. Hopefully, he'll learn from his rejection but I doubt it.

I have an orange number, which is the best you can get if you're not an Olympic athlete, aka the elite. So in theory this should get me a good start but unfortunately there seems to be rather a lot of us oranges and they're all doing the bloody disco dancing warm-up thing. All this dancing makes it difficult to get to the front and although I do push past loads, I'm still nowhere near the start line. I don't even hear the race start, possibility because Mr Warm-up is still doing his stuff, for the later starters, in my ear hole.

It's horribly congested and it takes around 2km to get some space to get running properly and I'm with all the wrong people, running at the wrong pace. I'm already well off schedule, so I just settle down and 'enjoy' it, cruising past loads of folks but not really running fast enough. I can't find a decent tail to chase, to speed me on.

Something else confuses me. Who is this very popular 'Alan Shire' chap, who everyone keeps shouting for, he seems to be continually shadowing me, despite the fact I'm overtaking loads of people. I'm really not into people chasing MY tail.

I keep looking over my shoulder trying to eyeball him and psyche him out but I can't put a face to the name. Then as I pass yet another person with the same dark blue strip it dawns on me, there isn't one 'Alan' there's loads of them. They're all shouting 'Come On Hallamshire', ah, Hallamshire Running Club, the locals.

They advertised the course as flat and fast and it is, well flat but it isn't fast, no for me anyway. Even the flat runs out at 9km. The last kilometre is steeply uphill and a complete killer. The clock is over 42 minutes when I cross the line. A bad day at the office or rather perhaps just a day at the wrong office.

I was obviously slacking because I have enough energy to take the boys on the park later and then in the evening I stay awake through a film at Broadway. Although with hindsight perhaps, sleep might have been advisable.

'Angel' is based on a book by Elizabeth Taylor (no, not that one). The ironically named Angel Deverell (Ramola Garai) lives with her mother above their grocery store. Angel though, doesn't live in reality and isn't remotely angelic. She refuses to accept the world as it is and instead creates her own, through her vivid imagination, where she is a renowned writer who lives in the nearby Paradise House, where she dreamed of living when she was younger.

Nobody thinks she has the ability to be a writer but amazingly, despite little or no life experiences to draw on, a publisher (Sam Neill) takes a wild punt on one of her romantic novels. Even then, he has his reservations and questions among other things, a glaring mistake in her book where she writes that champagne is opened with a corkscrew, but when she throws a tantrum and refuses to change it, he publishes anyway. Fortunately, after this, we are not treated to many more nuggets of her writing.

His wife (Charlotte Rampling) clearly thinks he's mad and can't stand the rude and childish Angel. She suspects it's just because he has the hots for her.

You can't help but agree with his wife about Angel, from the moment the wretched woman appears on screen, she is simply too vile to inspire any sympathy.

Amazingly, the book is a success and one by one all her dreams come true. Angel gets to live like one of the made-up heroines in her books and buys Paradise House but continues to live a life of complete fantasy. She isolates herself from everything else in the world, including the First World War, when it breaks out. 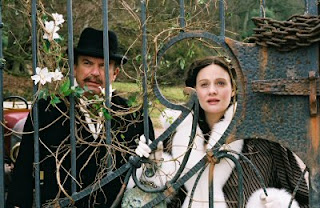 I think the film tries to hammer home the fantasy point because some of the scenes when they are travelling are so badly done, using superimposed backgrounds, that you think you've fallen into a parody of something from the 1950's. Surely, this must have been deliberate.

She meets the Howe-Nevisons. Nora (Lucy Russell), is her obsessive number one fan who begs her to let her be her personal assistant, and her brother Esme (Michael Fassbender), an untalented painter, with whom Angel falls in love with. 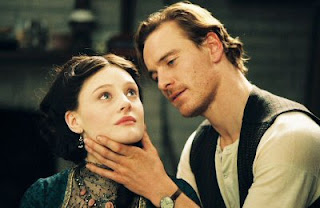 At first, he appears to be almost as unlikable as she is and I think they deserve each but then, because Angel is so selfish and so possessive of him, I start to feel sorry for him. She is so annoying that I can't imagine anyone putting up with her.

He goes off to war, the war that Angel pretends doesn't exist, probably just to escape her and comes back wounded. Trapped with Angel and the wheelchair she 'lovingly' provided for him, he hangs himself.

The war is also her undoing, she starts to incorporate her anti-war feelings into her novels and her readership deserts her, at a time when the country are pulling together in the war effort. You almost want to cheer when she herself falls ill and dies.

Oddly having aged badly, the make-up was a bit dodgy (shades of 'Love In The Time Of Cholera'), on her deathbed she seems to rewind back to her late twenties. 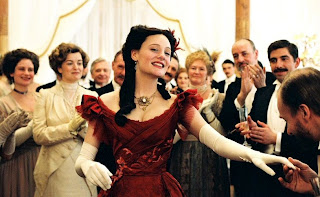 I wouldn't say it was a bad film because I found it quite enjoyable. The problem with it was that you never felt anything for the main character and not much for any of the others either. Throughout you just wanted someone to give her a really hard slap.
Posted by FitForNothing at Sunday, September 07, 2008