They say that as your age increases, the quality of your dreams diminish. Free falling over cliffs is out, as are plane crashes in the jungle and that Wembley FA Cup final. Instead, you get to dream about missing a bus or taking the dog out at 6am.

Oh, it isn't a dream. I really am up at 6am and taking Doggo around the pond. At least we're running, so it can almost be called training, if Doggo got a move on. L has drawn the short straw and has taken the short straw out.

Then I manage to not miss the bus to work. L checks to see whether I'm curled up on the Red Arrow asleep but I get off at the correct stop and manage to crawl into work. It's been a long time since I did that pond run first thing in the morning.

L's also shattered, so shattered she's resorted to drinking real coffee rather than de-caff. I'm on triple shots of the full monty.

Well it's happened; I've visited the Oggy Oggy pasty van. Not for a pasty though, they also do baguettes and the chicken tikka one was suitably spicy. Shame about the white bread though.

In the afternoon, L heads off to continue her channel swim, although in a ladies only session, which is sure to full of floaters but I suppose that's just like dodging all the debris floating in the channel. She vows to meet me later outside the Screen Room.

It's 1939 in London and the Second World War is on the horizon. Guinevere Pettigrew (Frances McDormand) is a middle-aged governess who finds herself forever falling out with her employers, so much so that her agency refuses to help her find work anymore. Destitute, homeless and dressed as Oliver Twist's mother, in the only set of clothes she owns, she steals a client's card from the agency and intercepts an employment assignment at the apartment of a nightclub singer named Delysia Lafosse (Amy Adams).

Delysia needs a social secretary to sort out her chaotic life. What she actually needs is a good slap but that doesn't actually happen. Delysia is determined to become famous on the London stage and by sleeping with Phil, a young West End producer, she hopes to secure a lead role. Problem is she now needs him to leave because the bed he auditioned her in and the flat in which she lives belongs to Nick, a smarmy nightclub owner who she sings for and also dallies with.

Using her initiative, Miss Pettigrew bluffs her way through the situation and gets rid of Phil. The film is a screwball comedy of sorts and at first, she thinks Phil is Delysia's Son. The 'comedy' continues with boyfriends coming and going, underwear hanging from the chandelier, clothes hidden under rugs, characters missing each other in the lift and several double entendres but nothing is particularly funny. 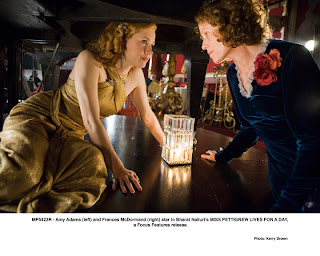 Unfortunately, for Miss Pettigrew, Delysia is an ongoing crisis, a bimbo who needs a lesson in life. Delysia, not her real name, is really just a normal girl who craves to be a social climber but who isn't very good at climbing. Amy Adams plays her perfectly, I suppose, basically reprising her role from Enchanted. She really gets on your nerves but I guess she's supposed to.

Her messy love life is completed by her piano player, Michael. A guy who accepts her for who she really is, and he wants to take her to New York on the Queen Mary but Delysia isn't interested. Her career and desire for the high life cloud her sense of reason. 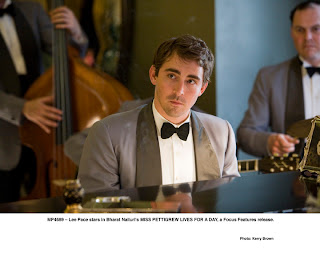 Miss Pettigrew hangs on to Delysia's coat tails for a day, kind of living the high life. Also being called upon to help a fashion editor called Edythe (Shirley Henderson) try and patch things up with her fiancé, an older lingerie designer (Ciaran Hinds). 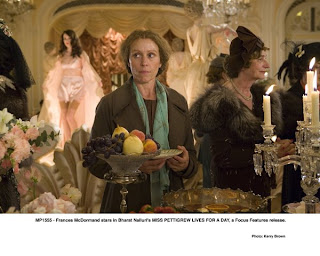 It's all very undemanding and in the end, Miss Pettigrew manages to help Delysia see sense and set sail with Michael, and in the process, she herself gets off with Ciaran Hinds. Somehow, Ciaran Hinds always seems to get the girl.

We head home and take the dogs out, down to the pub of course.
Posted by FitForNothing at Friday, September 19, 2008